Microsoft recently updated its by the Numbers webpage to indicate that the Windows Store and the Windows Phone Store have now passed half a million apps combined. More specifically, the two stores now include 525,000 apps between them.

We reached out to the company to confirm the figure and find out when exactly the half-million mark was reached. Microsoft confirmed the milestone and offered a slightly more updated figure. 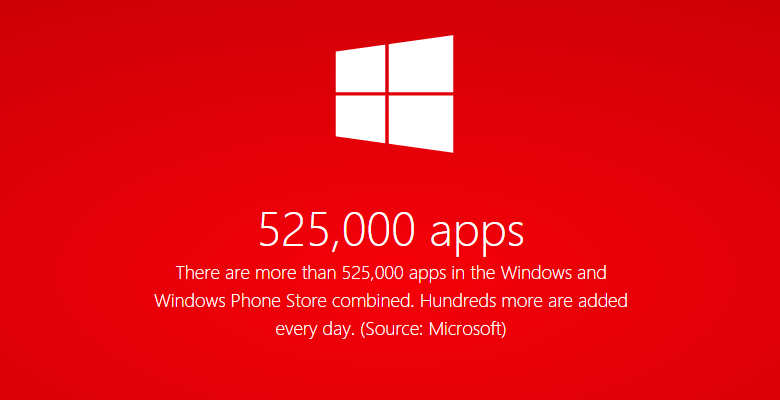 “There are more than 527,000 apps in the Windows and Windows Phone Stores combined,” a Microsoft spokesperson told VentureBeat. “This data is as of September 30, 2014.”

While the achievement in itself is good news for the company, because it shows both stores are still growing, it’s a stark reminder how badly Microsoft’s platforms lag behind Android and iOS. For context, the Google Play Store has over 1.3 million apps as of August and Apple’s App Store has 1.3 million apps as of September. The Windows Store and Windows Phone Store still have less than half of either.

As we learn more about Windows 10, including at the company’s consumer preview launch early next year and its Build conference for developers in April 2015, more details will be revealed about how the two stores will be combined. We already know they will offer universal apps, but what will happen to the existing half a million apps?