The internet may have put a dent in the coffers of offline retailers, but around 90 percent of shopping still takes place offline.

The benefits of ecommerce to retailers, however, are well understood. Beyond reducing overhead and making it possible to serve customers 24/7, the web offers myriad opportunities to “track” shoppers as they traverse the online world, observing where they spend the most time and at what stage of the transaction they’re most inclined to “drop off.” And this is why we’ve seen a rise in brick-and-mortar outlets turning to in-store tracking technology, not only to combat the likes of Amazon, but also to improve their own marketing and figure out how to turn a pair of passing legs into a paying customer.

Last year, RetailNext raised $125 million to help transform stores into giant arsenals of data — tapping sources such as video cameras, Wi-Fi, point-of-sale (POS) systems, weather, workforce management systems, geo-fencing, and beacons, among other conduits — to work out how many customers come into a store, what they do when they get there, and how to generate more money from them. Other technology solutions include the likes of Shopkick, which is a Bluetooth-based platform that tracks shoppers’ locations in stores to serve up recommendations and rewards based on the department they’re in.

While there is no shortage of technology providers working to solve the online-to-offline conundrum, a new company is officially presenting itself to the public today after several years in stealth. Zenreach is the handiwork of Jack Abraham, a San Francisco-based entrepreneur who sold his previous startup — Milo.com, which specialized in tracking inventory in local stores — to eBay for $75 million in 2010.

Zenreach was founded in 2013 and has been growing behind the scenes over the past few years. The company says that in its home hub of San Francisco, one-third of the local population has already logged into its service, and it now claims 150 employees across San Francisco; Scottsdale, Arizona; and Waterloo, Canada.

The company has raised $50 million since its inception, though it hadn’t revealed that figure until today. Most recently, Zenreach closed a $30 million Series B round led by Founders Fund, the VC firm helmed by Peter Thiel — and Thiel himself has now joined Zenreach’s board.

In a nutshell, Zenreach’s first product is a software-as-a-service (SaaS) solution that retailers use to offer free Wi-Fi to customers. As customers log in using their email address, Zenreach builds a customer profile that includes age, gender, and visit history, and over time merchants can distinguish between repeat or new customers, or customers that perhaps spend a little time in-store but make no purchases. It’s worth noting that all offers and promotions are opt-in, with customers able to “opt-out from any marketing at any time,” the company says.

Rather than focusing on the open rates of the emails or click-through rates, Zenreach looks at walk-through rates — actual feet on the ground in the store. The goal is to bring customers back at a later date by sending them automated emails at the right time. 4pm on a Friday? A bar may send a previous patron a message offering them a free drink that day, and Zenreach can track the efficacy of the campaign by establishing who actually visited the store based on a message they received. 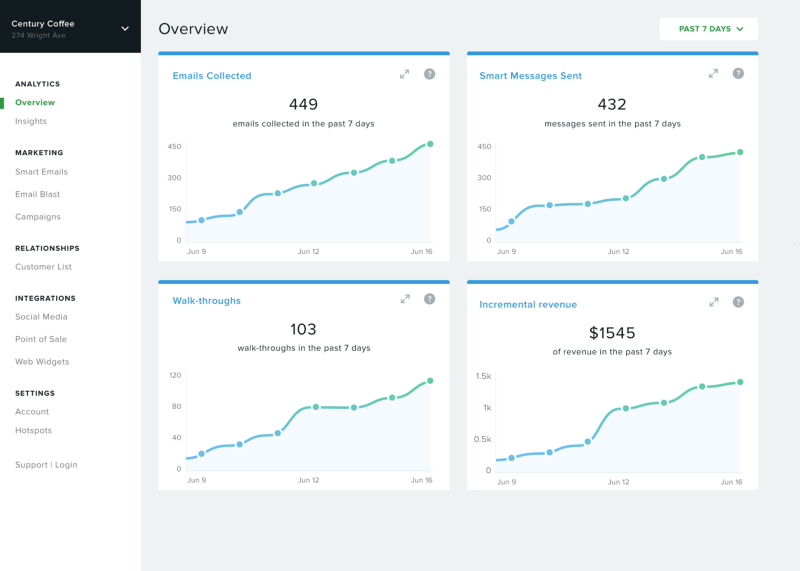 Of course, this level of consumer profiling won’t fill everyone with glee — businesses being able to track your movements and match them against a personal profile is exactly the kind of intrusive shenanigans that make many people’s skin crawl. But Zenreach is betting that by powering free Wi-Fi hotspots, thereby helping consumers circumvent pricey mobile data plans or plugging the gap left by 3G not-spots, it can create a win-win situation that not only justifies outlets offering free Wi-Fi, but arms them with powerful data to tempt previous customers back.

“We hope this means consumers will be receiving fewer of those annoying spam promotional blasts and more relevant, exclusive free offers from favorite restaurants, bars, and stores,” said Abraham.

The ecommerce market has shifted considerably since Abraham sold Milo.com to eBay six years ago — smartphones now play an integral part in consumers’ lives, whether for researching and comparing prices, finding brick-and-mortar outlets using digital maps, or making purchase directly from their phones.

“From founding and running Milo.com, I became intimately aware of the online-to-offline opportunity,” said Abraham. “Customers were turning to the internet to find what to buy, but there was no great way to figure out their options for buying it locally. We showed them. But the one bridge we weren’t able to build before being acquired by eBay was solving the online-to-offline attribution problem, showing merchants the impact we were having on their offline sales. Since then, every shopper has a smartphone, and it’s become clear that these devices are the key to linking online and offline, finally giving brick-and-mortar merchants the metrics they need to succeed.”

With $50 million in its coffers, the company is setting out to “supercharge” its growth, which will see its 150-strong team double and its service expand internationally.