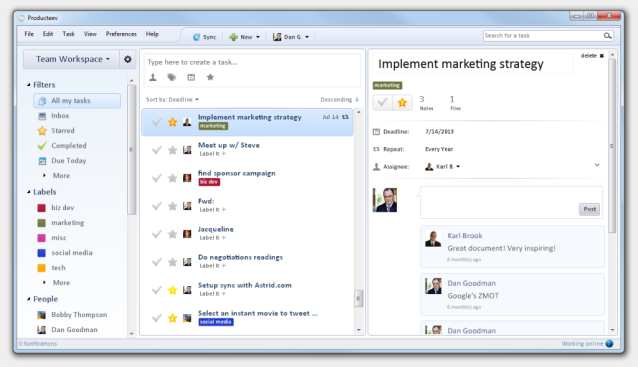 If you’re like me, you’ve tried and abandoned countless task management services. It’s easy to make a half-hearted promise with yourself to organize your tasks, it’s tougher to find a service that’s flexible and simple enough to use without becoming a chore in itself.

Producteev, which is launching a slew of new apps today, comes the closest to being the task management service I’ve always wanted. It works on a multitude platforms, can be used for both group and individual tasks, and even integrates directly with other task services (including some that it’s directly competing with).

The company also announced today that it has landed over 1,000 paying business customers, including companies like Orbitz, the Financial Times, and Logitech. That figure alone shows Producteev’s flexibility, as it works just as well for large group tasks and small projects as it does for managing your home shopping list. The big-name customer wins are even more impressive considering that the company doesn’t have a marketing budget — its growth is entirely based on good word of mouth.

The New York City-based company was founded in 2008, and has steadily improved its offering with features like e-mail integration, which helps add actionable tasks right from within your inbox. With its most recent apps, Producteev has reached a whole new level of task management.

The company rebuilt its synchronization engine from the ground up, so now updating and finding your tasks across devices is easier than ever. Producteev is also launching a revamped iPhone and web app, as well as debuting an Android and Windows 7 app. Co-founder and CEO Ilan Abehassera tells me the company’s goal is to make all of its features available from every app. They all sport revamped interfaces, natural language processing, and the ability to create multiple task workspaces (free workspaces support up to two users, while team workspaces cost $20 a month).

Producteev is also the first company to use TaskRabbit’s new API, allowing you to seamlessly outsource simple tasks to people in your community with just one click. Abehassera called the TaskRabbit integration an “interesting way to get into crowdsourcing … not just managing tasks, but also completing them.”

As for what’s on the horizon, Abhessera tells me the company is focused on delivering iPad and Windows Phone 7 apps next.

You can take a look at Producteev’s new features below: