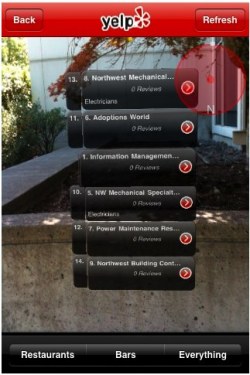 Yelp, the social review site, is claiming to have “the first Augmented Reality app specifically for the U.S. in the iTunes App Store.” By augmented reality, Yelp means that the app displays markers for restaurants, stores and other locations of interest right on top of the live view through the iPhone’s camera lens. Internet content firehose Robert Scoble touted the app — you need to shake it to turn it on — on FriendFeed earlier today.

The screenshot at right from Read/Write Web shows the app in action. It’s kind of like having a Yellow Pages book that connects to your iPhone to look up businesses by location instead of industry.

Read/Write Web editor Marshall Kirkpatrick said that iPhone developers had been led to presume that augmented reality apps would not be allowed in the store until the release of the next revision of Apple’s iPhone operating system this fall. “Building a little AR into an already established app seems to be the method of choice for sneaking AR into the app store,” Kirkpatrick wrote.

One obvious reaction to Yelp’s app is that the stack-of-listings seems uninspired compared to Roambi’s iPhone-centric reimagining of how do display spreadsheet data on an iPhone touchscreen. Can other developers use Yelp’s API to to whip up other, possibly better ways of displaying Yelp’s Internet info over a view of the real world? They’d be stupid not to let the fans — by which I mean the Bay Area’s upper middle class of software developers who use Yelp to avoid playing restaurant Russian roulette — do the work.
Come see the most promising new technologies unveiled for the first very time at DEMOfall 09 this September 21-23 in San Diego. VentureBeat readers may register to attend the conference at a special 20% discount off our regular rate. Register now at: http://www.demo.com/f9vb2
[Screenshot: Read/Write Web]