Skype today announced the free Skype Translator preview program. While you can’t test the company’s real-time speech translation tool just yet, you can sign up to do so here.

Before you do, however, you should know the tool will initially only be available on Windows 8.1 computers and tablets. The reason for the registration requirement is because “limited spots” are available, according to Skype.

There will also be a limited selection of languages, though the Microsoft-owned company didn’t share which ones. The sign up page does offer a hint, though; the following 12 languages are listed as choices for “Tell us what languages you’re interested in”: Arabic, Chinese (Cantonese), Chinese (Mandarin), English, French, German, Italian, Japanese, Korean, Portuguese, Russian, and Spanish.

The sign-up page also asks for your email address and a question about which devices you currently make Skype calls on. The options are Windows 8/8.1/10 preview, Windows 7/XP, Windows Phone 8/8.1, Android phone or tablet, iPhone/iPad, and Mac. Skype hints Translator will be ported to other platforms based on what users check off, so choose carefully.

After you sign up, Skype will email you to say it has “saved you a spot in line.” These bullet points will also tell you what to expect: 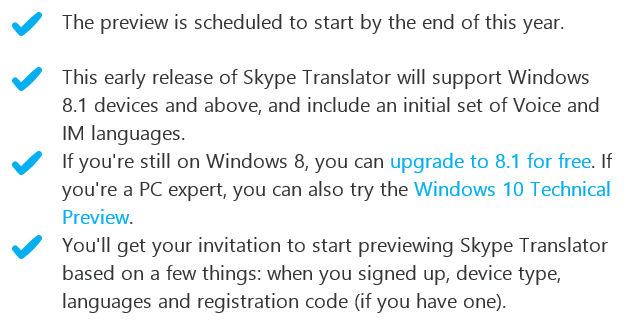 Microsoft CEO Satya Nadella and Skype Corporate Vice President Gurdeep Singh Pall unveiled Skype Translator back in late May. The engineering team behind the project has “been hard at work to get the technology behind Skype Translator ready for a preview release” ever since.

At the time, Microsoft said it was planning a beta for “later this year.” While the sign-up page may be live, the company still has some two months to deliver the actual software in preview.