That’s important, because from an investor standpoint, recurring revenue is twice as valuable as non-recurring. This is something that doubles its enterprise value compared to a company that has to sell a new widget every month, quarter, or year. The reason is simple: Keep your customers happy, and the money keeps flowing in. No further sales efforts are required. The story of how Adobe managed to accomplish that has been told, but what did the company learn in the process?

Adobe SVP of go-to-market and sales Rob Giglio shared the lessons learned along the way at Imagine 2019, the company’s conference for its ecommerce platform Magento. “We moved from a very small percentage of our business being recurring to 90%,” Giglio said. “At the same time, we increased our revenue growth rate [from 11%] … to about 24% today.” 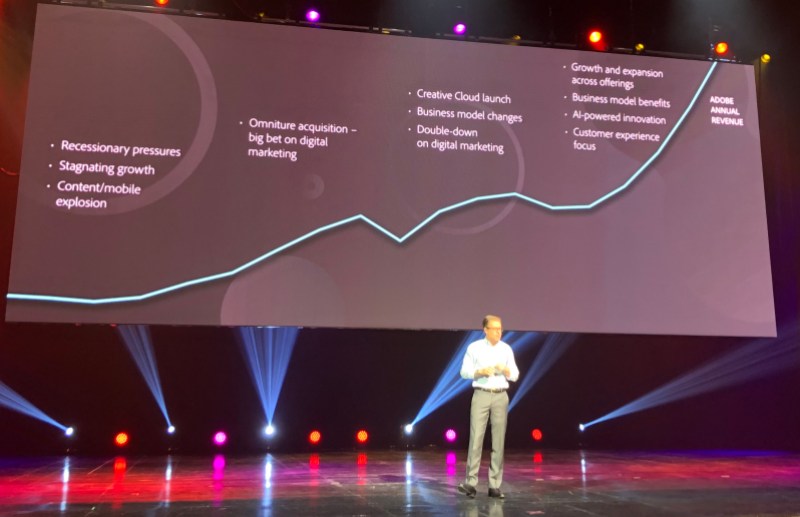 The first lesson: You can’t get close enough to your customer. When you sell a box, you ship the box. Your customer opens the box, and starts using the product, and you have very little further visibility into what they’re doing, what challenges they have, and how much value they’re actually getting (or not getting) out of the product. In essence, you’re customer-blind. You see the sales journey, but you don’t see the full customer experience because the biggest (and most hidden) part is their usage.

“We went from an arms-length relationship with customers to a 24/7 interaction,” Giglio said. “We’re taking signals from customers in real time.” Now, the product is part of the marketing — perhaps even the biggest part.

The second lesson builds on the first: You can’t have enough data. All that usage data tells Adobe which customers are healthy, which ones are having usability or learning issues, and which ones are at risk of churning. “We try to make sense of millions and millions of customers, and treat them as if they were one,” said Giglio.

Practically, that means finding ways to keep people engaged in the product. Adobe uses predictive modeling based on usage data to deliver the right tutorial at the right time. If customers get great results with minimal effort, that’s a positive product experience, and they’re likely to ensure that they’ll maintain the subscription.

The third lesson is obvious: You can’t stand still.

Shipping boxes gives you an obvious product sales starting point: Each year you increment the software’s version number and have a series of new features and selling points to incentivize upgrades. But in a subscription world, every day is launch day. You can make the product better, easier, faster, and more bug-free. Accumulating enough incremental value over time means you not only keep existing customers, but add new ones.

The fourth lesson is one that marketers have long employed, and product managers are using more and more frequently: Test, test, and test again.

Does the product work better with the menus this way, or the buttons that way? Does a new feature add value, or detract? Is a process simple enough, or is there a more frustration-free way of implementing it? “Today we run about 200 tests on Adobe.com each week,” Giglio said.

You simply cannot test that much and use that much data without intelligent automation. While the company is running 200 tests a week now, Giglio wants to be running about 2,000 a week. But people don’t scale easily. And interacting with millions of customers can’t be done by millions of customer service people.

Nothing’s perfect, of course. Adobe recently got egg on its face for telling users of older versions of its software that they could get sued if they don’t upgrade, thanks to third-party software components in those versions that Adobe is no longer licensing. So there are some challenges on the path to full recurring revenue and the new paradigm of not owning software. But from a business standpoint, it’s hard to dispute the results: Adobe stock is up nearly 300% in five years.