The cryptocurrency gold rush has produced a lot of jobs, with the share of cryptocurrency jobs per million rising 1,457% over the past four years, according a study by job site Indeed.com.

Despite drastic price fluctuations (Bitcoin’s volatile value shot up more than 230% in the first six months of 2019 to above $12,000 per Bitcoin) and nearly half of companies citing regulatory uncertainty as a major barrier to blockchain adoption, employers continue to ride the wave and invest in blockchain tech and talent.

Mark Zuckerberg, for instance, wants to launch Facebook’s Libra, a new global cryptocurrency, in 2020. And digital payment giant Square recently assembled a crypto-focused team, Square Crypto, with the goal of strengthening the Bitcoin ecosystem. You will also soon even be able to spend Bitcoins at Starbucks through a new exchange app that converts digital assets into dollars.

Indeed analyzed millions of job postings on Indeed.com to unpack how Bitcoin, cryptocurrency, and blockchain trends have affected the job market.

Crypto jobs are up, but searchers are down 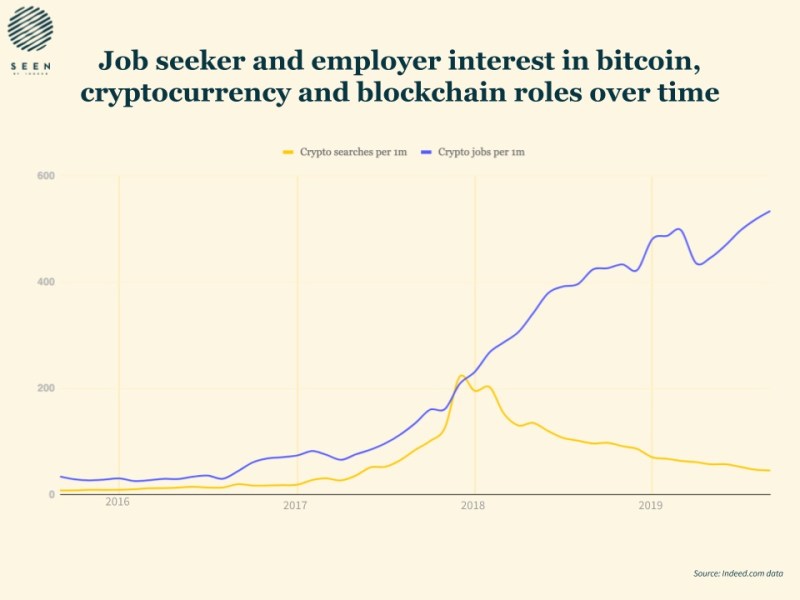 Searches for Bitcoin, blockchain, and cryptocurrency roles are going down — yet employer demand has skyrocketed. According to Indeed, in the four-year period between September 2015 and September 2019, the share of these jobs per million grew by 1,457%. In that same time period, the share of searches per million increased by 469%.

In the past year, the share of cryptocurrency job postings per million on Indeed.com has increased by 26%, while the share of searches per million for jobs has decreased by 53%. Bitcoin’s volatility seems to correlate with job seeker interest, and the change in Bitcoin price this year might be why job searches have declined.

Employers, however, are doubling down on the technology, which uses decentralized ledgers to produce secure and transparent transactions.

So employer demand for tech roles related to Bitcoin, blockchain, and cryptocurrency is high — but what are those jobs?

From coding smart contracts to designing user interfaces for cryptocurrency apps to building decentralized applications (dApps) that communicate with the blockchain, there’s no shortage of work to be done in the cryptocurrency field.

For a better chance at landing one of these roles, you should be a programmer. And you should familiarize yourself with basic cryptography, P2P networks, and a language like C++, Java, Python, or JavaScript (along with certain soft crypto skills).

To stand out, you should learn new blockchain development languages, like Hyperledger, Bitcoin Script, Ethereum’s Solidity, the Ripple protocol, or even languages currently in development — like Rholang.

Companies doing the most hiring 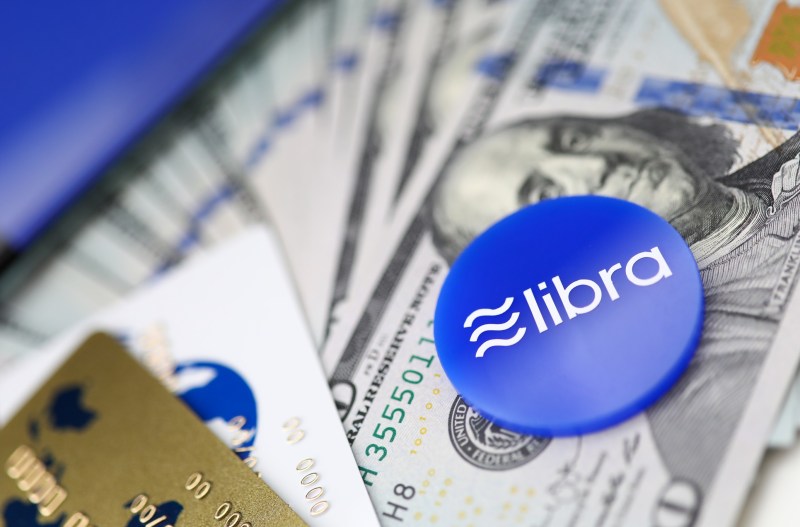 Software roles make up the highest percentage of cryptocurrency jobs. Since blockchain technology has expanded well beyond the financial sector, you’ll see a sprinkling of crypto startups, but also bigger, more established firms not directly related to cryptocurrencies (or even the financial industry at all).

Two of the Big Four accounting firms make the top 10, along with tech giant IBM. Why? Earlier this year, EY launched a new cryptocurrency tax accounting tool for investors, and consulting firms are hiring blockchain talent to advise clients on how to apply these new technologies. IBM is also making waves with IBM Blockchain World Wire, a blockchain network that clears and settles international payments in near real time.

Not surprisingly, five companies related to cryptocurrency — Coinbase, Ripple, Circle, Kraken, and ConsenSys — made the list. Only ConsenSys made the top 10 in the previous list of Bitcoin hirers from May 2019.

Financial companies are hiring a lot of blockchain and cryptocurrency talent and are designing their own dollar-backed digital coins. Signature Bank (No. 15), for example, built its own blockchain platform, Signet, to allow its clients to move money around in 30 seconds, 24/7 by converting dollars to Ethereum-based tokens known as Signets.

Given blockchain’s potential, companies outside the traditional finance ecosystem are starting to adopt it for use in supply chain management, ecommerce, telecommunications, and beyond.

Collins Aerospace (No. 5), for example, is an Iowa-headquartered company that provides solutions for the aerospace and defense industries. It’s using blockchain technology to make complex global supply chains more efficient and to protect defense and space-related data from cyber attacks.

Another company you might not expect to be hiring a lot of cryptocurrency talent is online home goods retailer Overstock.com (No. 8). However, this makes sense because it was the first major retailer to accept Bitcoin as a form of payment, starting back in early 2014. The company now accepts all major cryptocurrencies and has since founded a venture capital arm, Medici Ventures, to accelerate blockchain innovation.

Bitcoin jobs are not as volatile as the currency

As Bitcoin, blockchain, and the cryptocurrency industry continue to enjoy rapid growth and widespread adoption, companies of all sizes and from all industries have been ramping up hiring over the last year.

That trend is likely to continue through 2020, even in the face of extreme price volatility and regulatory uncertainty around cryptocurrency.

And while Bitcoin and other cryptocurrencies might currently function more like assets than true currencies (there’s not much you can actually buy with them), that’s changing as major retailers begin accepting digital tokens and more unique use cases for these technologies pop up.

Indeed.com analyzed the percentage change in the share of job postings and share of job searches per million for roles related to Bitcoin, cryptocurrency, and blockchain during the time period specified.