Just how profitable is it to mine Ethereum? To properly answer this question, let’s start at the beginning: Let’s construct a hypothetical mining rig, plug in some reasonable numbers, and come up with a pragmatic analysis of how much you can earn through Ethereum mining.

Let’s also hold the price of Ethereum static. By removing any profitability from the appreciation of Ethereum from the equation, we’ll be able to correlate the actual rates of return exclusively with hardware, electricity, and any other costs associated with running a mining rig.

Our assumption set uses numbers from January of 2018 that you can see below (we have done our best to use reasonable and middle-ground numbers): 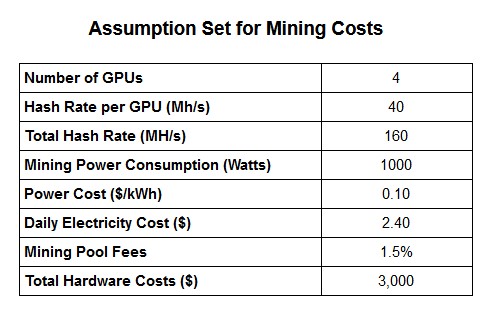 As you can see here, our hypothetical mining rig is more efficient and profitable than some of the best mining equipment on the market right now. We are assuming four GPUs that mine 40 MH/s each. The hardware specs are four GPUs, plus a processor, a motherboard, and a power supply rated at 1,000 Watts of electricity. The cost of this rig would be approximately $3,000.

A reasonable cost of power is approximately 10 cents per kwh. This is below the national average for retail power rates in the U.S. To run a mining rig you will likely pay at least 10 cents per 1,000 watts run for each hour. This means one full day of mining comes with an electricity cost of $2.40. We will also use the block reward and block difficulty from January of 2018 as our base point. And we assume mining with a single rig is only reasonable when working with a mining pool. Some mining pools take up to 10 percent of your earnings, but some of the best only take 1 percent. For that reason, we’ve pick a modest 1.5 percent. 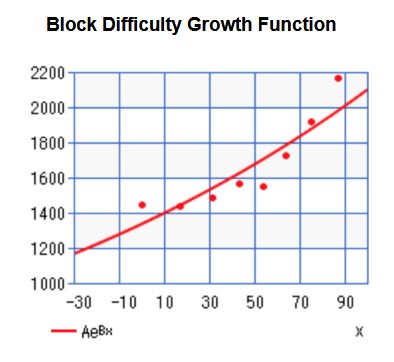 Based on this fit, we found the following values to describe a predictive line for future values of the difficulty function. 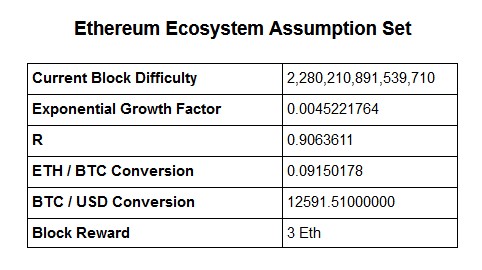 The block difficulty shares an inverse relationship with the profitability of your Ethereum mining rig. This means that every day, as the difficulty gets higher, your rig’s profitability is reduced.

Eventually, your rig will make less money per day than the cost of electricity to keep it running. At this point, you would have to turn off your miner, because keeping it on will lose you money.

Using CoinWarz’s mining profitability calculator, we can plug in a growing block difficulty to see that the profit per day goes from $18.24 to $1.60 in just one year. The calculator uses the following inputs: hash rate (MH/s), power (Watts), power cost ($/kWh), difficulty, block reward, pool fees, ETH/BTC value, BTC/USD value, and hardware costs. For our predictive profit function, we plugged a point into the calculator once every month and assumed a linear fit in between each point.

According to this calculator, if you started mining in January 2018, a year and a half in (day 476) you would start losing money since your Ethereum mining rig would cost more to run than it would generate in profit (again, assuming a static price in Ethereum).

The total profit you would have accrued by the end of your mining rig’s profitable run would be $2,916.59. However, if you back out the initial upfront costs discussed above, you’ve actually made slightly less than you’ve invested. You could resell your GPUs to cut some of your losses, but your equipment will have lost a lot of value and that loss is only going to accelerate as newer mining equipment continues to improve at an impressive rate, something that is making GPUs from a year and a half ago already lose a majority of their value. Your GPU resale value will ultimately determine your overall mining investment return.

In our calculations, we also used a favorable, but not ideal, scenario for electricity costs. Consider the following three examples, one of an individual miner in Connecticut, one in Washington D.C., and our hypothetical mining rig:

Depending on where you live, electricity can greatly affect the profitability of mining. In the case of a miner in D.C., you would just barely break even if you sold all of your GPUs for $150 a piece.

We have also excluded other potential costs from our calculations. These costs could include further expenses such as operational, cooling and maintenance costs.

Of course, the real hope with mining is that the currency you are mining (in this case Ether) will appreciate greatly. Going through the mining process to gain Ether may seem like an inefficient route to the currency.

You could instead just choose to invest all that money into your desired cryptocurrency to start with, in which case you would derive profits without the operational headache of running mining equipment.

There is an ever greater threat to mining profitability approaching in the near future: Ethereum is soon moving to a proof-of-stake model with the Casper Protocol. When this happens, something expected in 2-3 years, traditional mining will no longer work and mining rigs will become obsolete. Rigs will no longer be able to generate streams of revenue from Ethereum mining. Instead, only by locking in stake will “stakers” (as opposed to miners), be able to profit from the Ethereum Blockchain. To be a staker you will no longer need the complicated hashing power of GPUs that proof-of-work required.

This post is not intended to discourage mining on the Ethereum network. Miners are needed to secure the vast decentralized system we enjoy today. Our intent is to show that mining profitability is based on the appreciation of Ethereum. As we move into a world with more decentralized services that pay in Ethereum directly, or services that pay in other crypto-assets, mining may become less favorable due to the large depreciating investment in hardware.