Ventana Micro Systems has raised $38 million to design datacenter RISC-V processors as part of a push to create open hardware.

Ventana’s chips will be based on RISC-V, a new open source processor architecture that has emerged as an alternative to the popular Arm chip architecture. The latter might become part of Nvidia one of these days if regulators approve the company’s $40 billion Arm acquisition. In contrast to Arm, RISC-V charges no royalty fees.

Cupertino, California-based Ventana was started in 2018 by industry veterans Balaji Baktha and Greg Favor. I met Favor back in the 1990s when he was chip architect for NexGen, which was acquired by AMD. He went on to become the architect of numerous chips at Montalvo Systems, Applied Micro, and Ampere Computing.

The funding came from Sehat Sutardja and Weili Dai (founders of Marvell Technology Group) and other prominent semiconductor investors. Ventana has raised $53 million to date.

“In the age of software-defined everything, open and extensible compute is the key to driving innovation,” Favor said in an email to VentureBeat. “Ventana was founded to address the market need for a high-performance, customizable, and secure processor as the datacenter moves toward a disaggregated architecture and domain-specific accelerators. Ventana’s chiplet-based approach enables customers to achieve rapid productization and add unique customizations to differentiate their products.”

This means the company will be able to customize its chips for the application at hand. I asked Favor why the company is adopting the RISC-V architecture.

“Rather than being beholden to the rigid nature of proprietary instruction set architecture (ISA) that stifles innovation, RISC-V’s open architecture is extensible to address specific market verticals and offers the ability to unlock innovation via custom instructions,” Favor said. “Additionally, RISC-V saves tens of millions of dollars in architecture license fees.”

In an age when Moore’s Law (the prediction that chip performance will double every couple of years) is slowing down because we are hitting manufacturing miniaturization limits, custom applications and custom chips are expected to produce big performance leaps to keep electronics progress on track.

Baktha said in a statement that nearly half of computing performance is moving away from general-purpose processors in favor of infrastructure compute and custom accelerators. (Intel said as much last week). That favors Ventana’s chiplet approach, he said. Cisco executive VP Eyal Dagan backed up that claim. 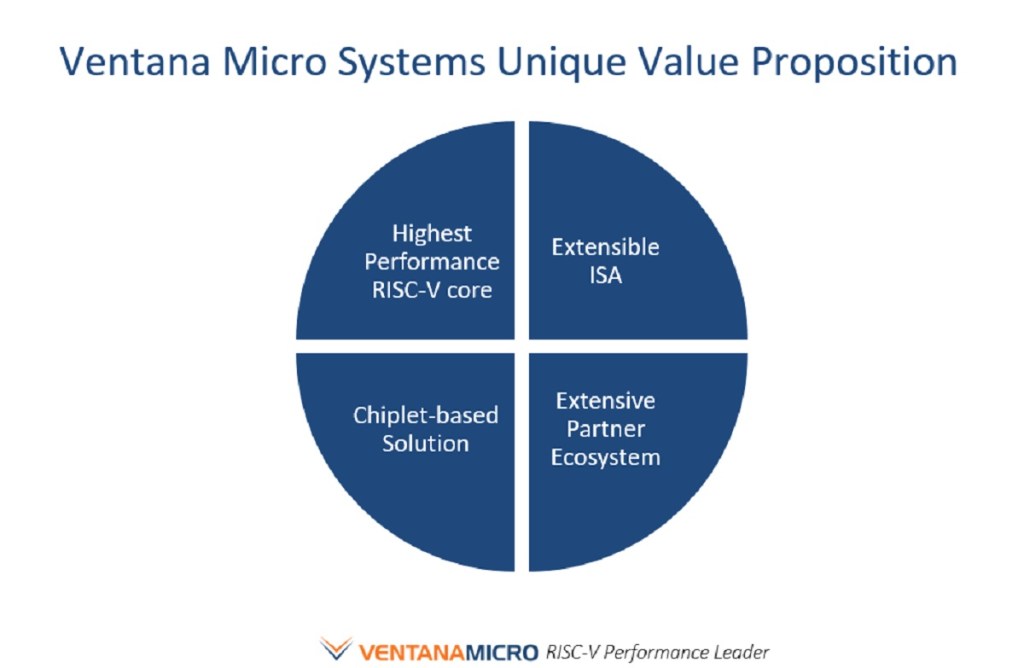 Above: Ventana believes it can create high-performance RISC-V cores.

“As Moore’s Law is slowing, the industry is moving toward chiplet-based designs that optimize cost by using the right process node for each component of the design,” Linley Group principal analyst Linley Gwennap said in a statement. “Ventana’s chiplet strategy accelerates deployment of this emerging approach across a broad range of customers and partners while tapping rising adoption of the open source RISC-V architecture.”

Ventana has over 100 employees and will hire more as it comes out of stealth, Favor said.