Enterprise software vendor BMC has acquired the technology assets of Boundary, a startup that has built tools that engineers can use to monitor the IT infrastructure they’re using to run their applications.

Update: BMC confirmed the deal in a brief statement this afternoon, hours after VentureBeat originally reported the news. Terms of the deal weren’t disclosed, and the statement didn’t detail plans for the team or the integration of the Boundary product into BMC.

Before the official statement on the acquisition, the BMC name was plastered at the bottom of several pages of the Boundary website.

“Hi! We are Expanding our Boundaries. But don’t worry — your Free Trial will be back soon,” Boundary declares on its pricing page. 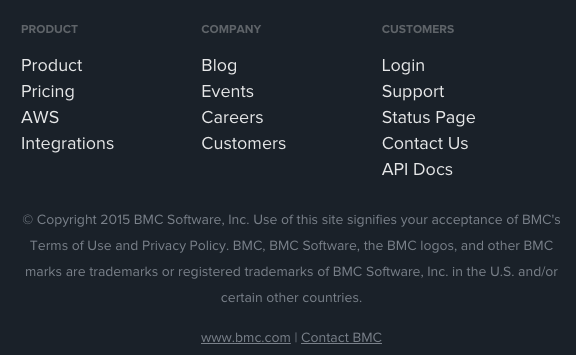 Above: BMC mentioned at the bottom of Boundary’s website.

Boundary’s interim president, Larry Warnock, was previously president and chief executive of Phurnace Software before BMC acquired it in 2010. He’s worked at other companies that have gotten acquired, too, most recently Gazzang, which Cloudera bought last year.

The deal comes after application performance management (APM) provider New Relic went public. AppDynamics, another company in that business, could be in a position to go public soon, having raised $120 million last year.

The acquisition is interesting on a few levels.

Gary Read, who served as Boundary’s chief executive from early 2012 until February of this year, spent five years working for BMC earlier in his career. His occupation is now “family and relax time,” according to his LinkedIn profile.

Boundary started in 2011 and has been based in Mountain View, California. Last year the startup announced a $22 million funding round. Investors include Adams Street Partners, Lightspeed Venture Partners, Scale Venture Partners, and Triangle Peak Partners.

Its tool provides monitoring for cloud infrastructure as well as on-premises compute, storage, and network monitoring. The tool offers plugins for databases and other application components. Customers include Adobe, Beats, Gilt, Expedia, and Rackspace.

Other IT monitoring startups include DataDog, ScienceLogic, and SignalFx, among others. IBM and Zenoss have software for this sort of thing, too.