Cloud file-syncing and file-sharing company Box today announced that it’s now possible to create and edit Office Online files in Box, thanks to an expanded partnership with Microsoft.

That means you’ll be able to work on Word, Excel, and PowerPoint files in Box, as David Still, vice president of product for mobile at Box, pointed out in a blog post on the news.

The new partnership also brings Box features such as task management, alerts, and most prominently, sharing to Office Online. And later this year, Box said, its features will also arrive on Office for iPad and iPhone.

The bigger picture is that Box is embracing Microsoft more tightly than ever before. It’s ironic because Microsoft sells file-sharing tools OneDrive and SharePoint, and because Box cofounder and chief executive Aaron Levie for years made fun of Microsoft. 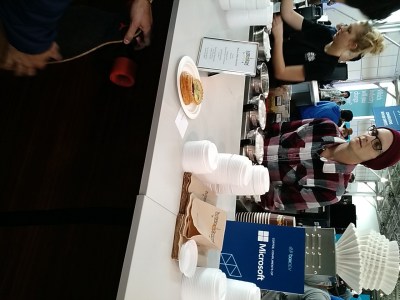 Above: Microsoft sponsors a Philz Coffee booth at the 2015 Box Dev conference in San Francisco on April 22.

But Box is a publicly traded company now, and it has grown out of its make-fun-of-Microsoft phase.

In the past year the two companies have come together for a few announcements.

In July Box announced an integration with Outlook to generate shareable links for email attachments. At the BoxWorks conference in September Levie announced a beta program for Box integration with Office 365 on desktop. And this past February Box joined Microsoft’s Cloud Storage Partner program.

Here’s a video on the new Office Online integrations: