Enterprise software vendor VMware kicked off its big annual VMworld conference in San Francisco today with several news announcements, from new open-source tools to a new “intelligent automation engine” for making the best use of companies’ data center equipment. Other companies interested in riding the wave of attention this week have made announcements, too.

A lot of people are paying attention. More than 23,000 people are here at the Moscone Center for the event, and more than 50,000 people were live streaming today’s keynote. This is, after all, one of the biggest events all year in the world of enterprise technology.

For your convenience, here’s a roundup of all the news coming out of the conference. 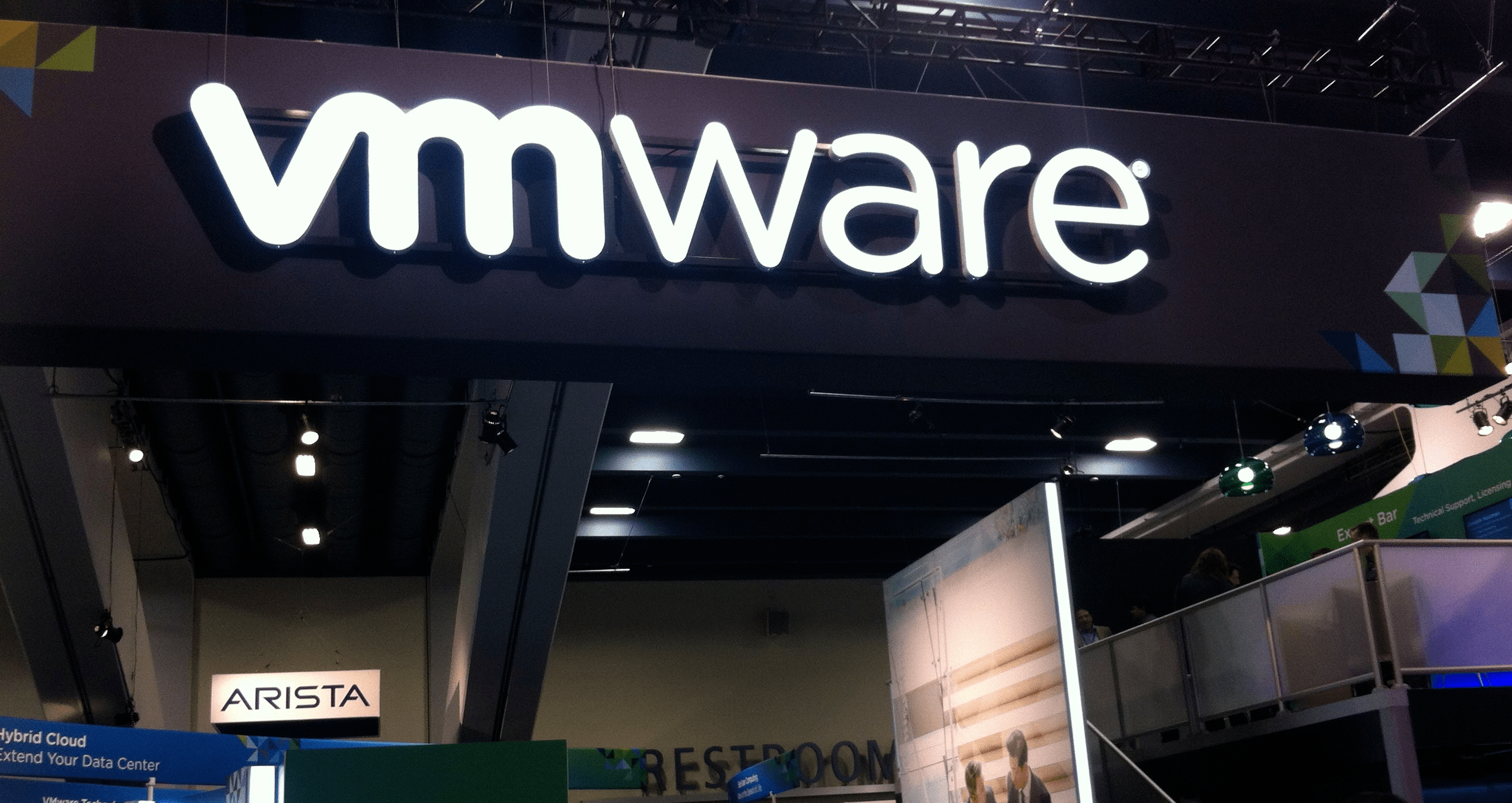 Above: On the exhibition floor at VMware’s VMworld conference in San Francisco on Aug. 25, 2014.

Companies can test and run plans for disaster recovery in vCloud Air’s new cloud-based Site Recovery Manager Air. And VMware is starting to offer disaster recovery on vCloud Air based on usage, instead of just as part of a monthly or yearly subscription. VMware is also introducing vCloud Air Object Storage powered by Google Cloud Platform, the first new product to come out of VMware’s reseller relationship with Google, announced earlier this year. 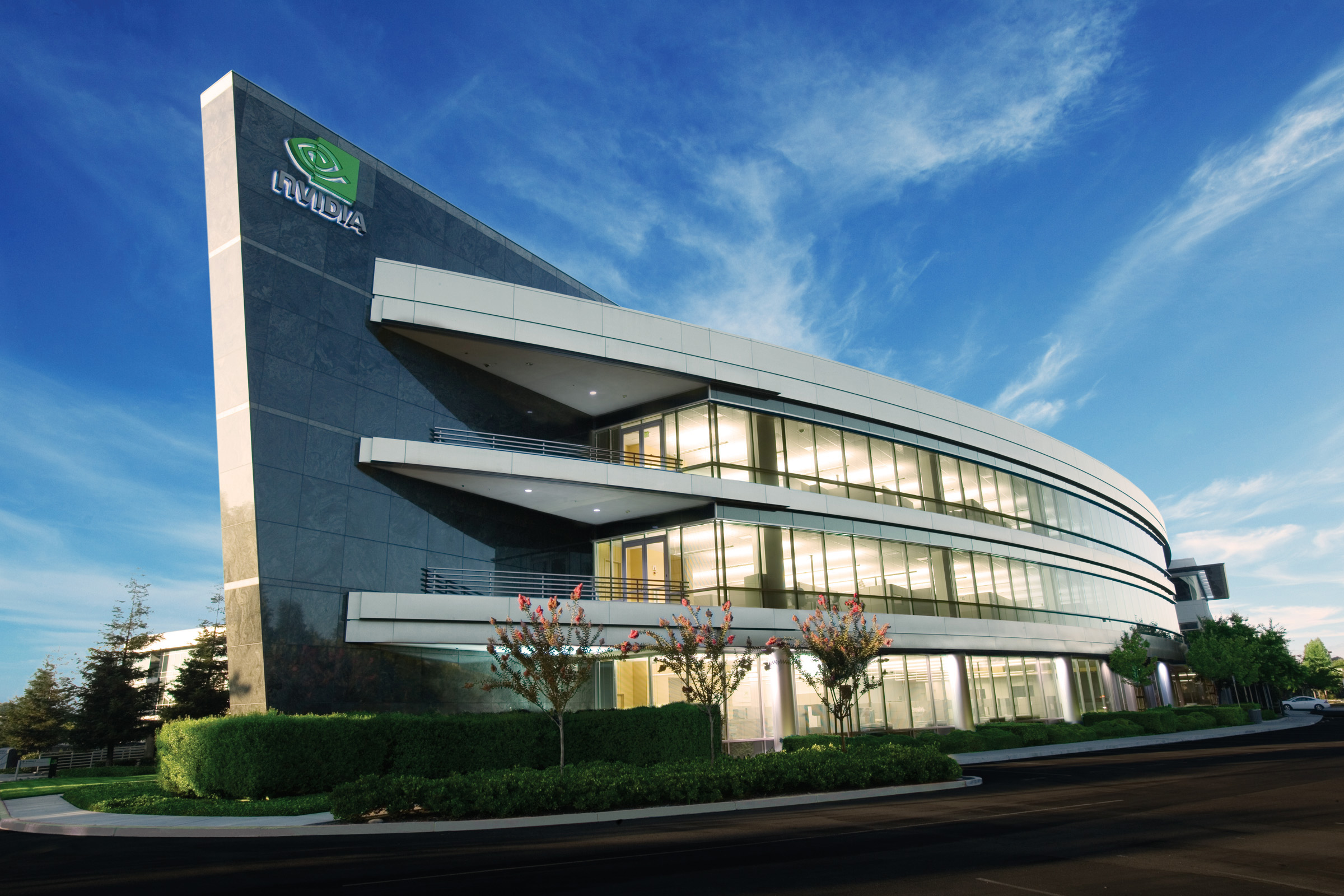 Chipmaker Nvidia today announced the launch of Grid 2.0, the latest version of its desktop virtualization technology that companies can use to deploy graphics-heavy applications remotely to employees who are offsite.

Companies can buy servers packing Nvidia Grid boards and then use virtualization software — such as VMware vSphere 6 and Horizon 6 and Citrix’s XenApp, XenDesktop, and XenServer — to share the power of GPUs (graphic processing units) with Grid 2.0.

The new release can handle as many as 128 users per server, twice as many as before, according to a statement. And Grid now supports the Linux operating system, not just Windows. Plus the technology can now run on blade servers, not just rack servers. 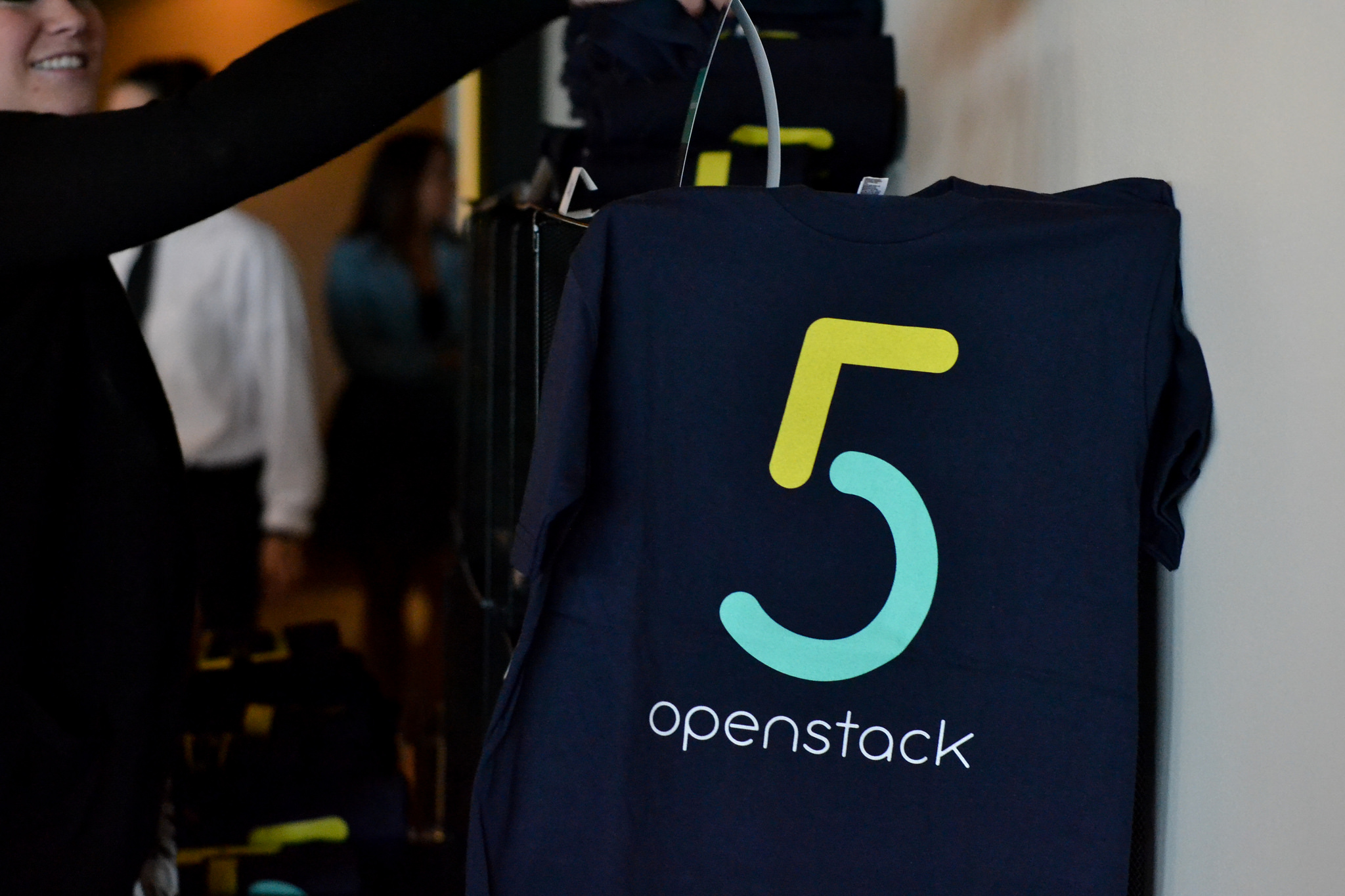 Above: OpenStack’s fifth birthday party at OSCON in Portland.

VMware today announced the launch of VMware Integrated OpenStack 2.0, the company’s second release of its distribution of the OpenStack open-source cloud software. The new release, based on OpenStack Kilo, which became available in April, will become generally available to customers by Sept. 30.

VMware first announced that it would assemble an OpenStack distribution at the company’s VMworld conference in San Francisco last year. It came out in February, based on the open-source OpenStack Icehouse software. “Customers will now be able to upgrade from V1.0 (Icehouse) to V2.0 (Kilo), and even roll back if anything goes wrong, in a more operationally efficient manner,” VMware product line manager Arvind Soni wrote in a blog post on the news. 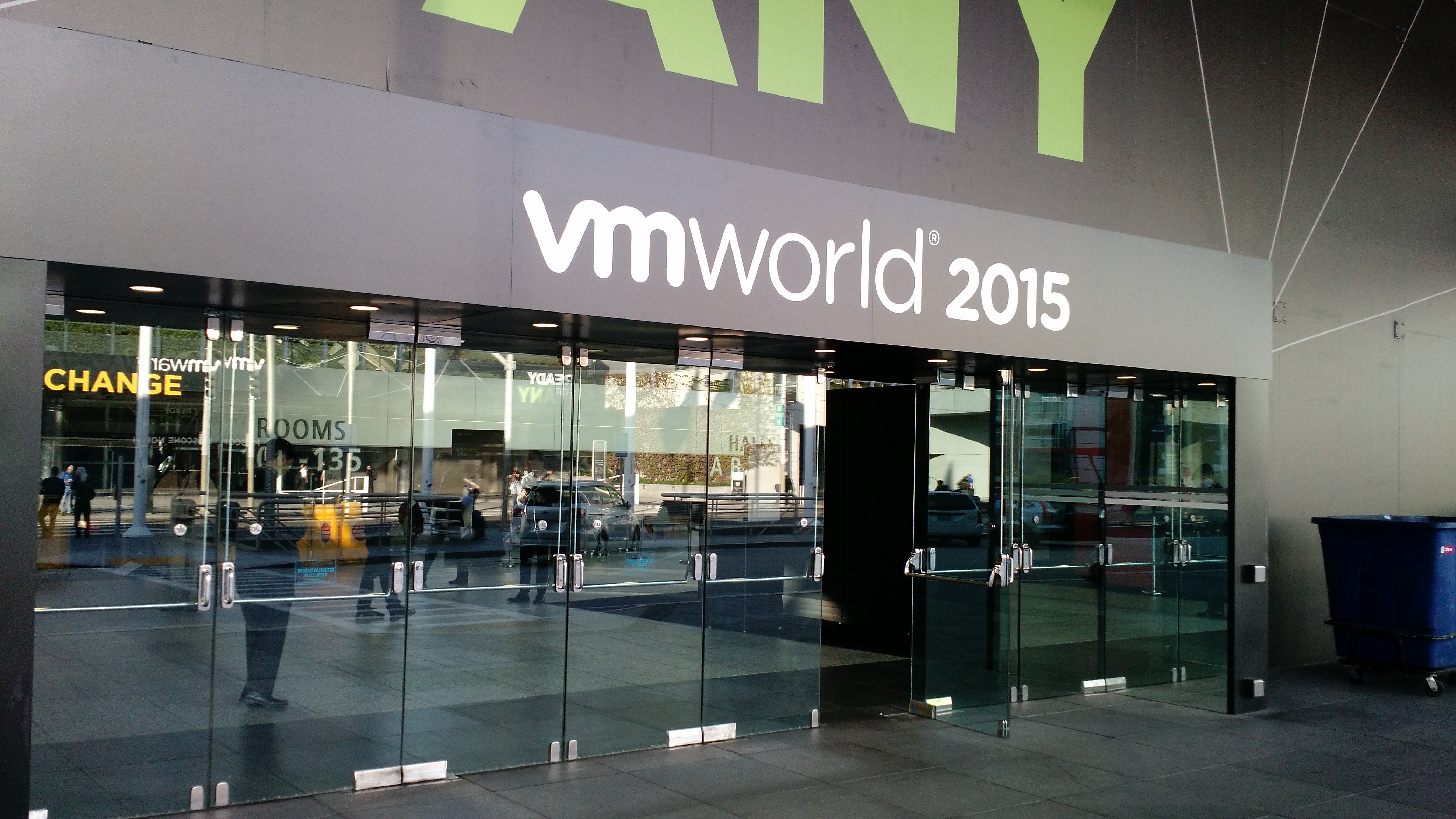 Above: At VMware’s 2015 VMworld conference in San Francisco.

The fascinating thing here is how VMware sees this new technology as underlying a whole bunch of existing technologies from other companies that have been gaining popularity in the past several months. That includes Docker’s Swarm, Google-led Kubernetes, Mesosphere-led Apache Mesos, CoreOS’ Rocket, Cloud Foundry — “all on Photon,” said Kit Colbert, VMware’s vice president and chief technology officer for cloud native applications, in a press conference before today’s general session. All these can integrate with vSphere Integrated Containers.

Startup ClusterHQ today announced that it has teamed up with VMware to develop a storage driver that allows ClusterHQ’s Flocker open-source software to integrate with VMware’s vSphere server virtualization software.

The result is that companies can now provision storage for specific containers, not just virtual machines, with VMware storage software like Virtual SAN and vSphere Virtual Volumes. 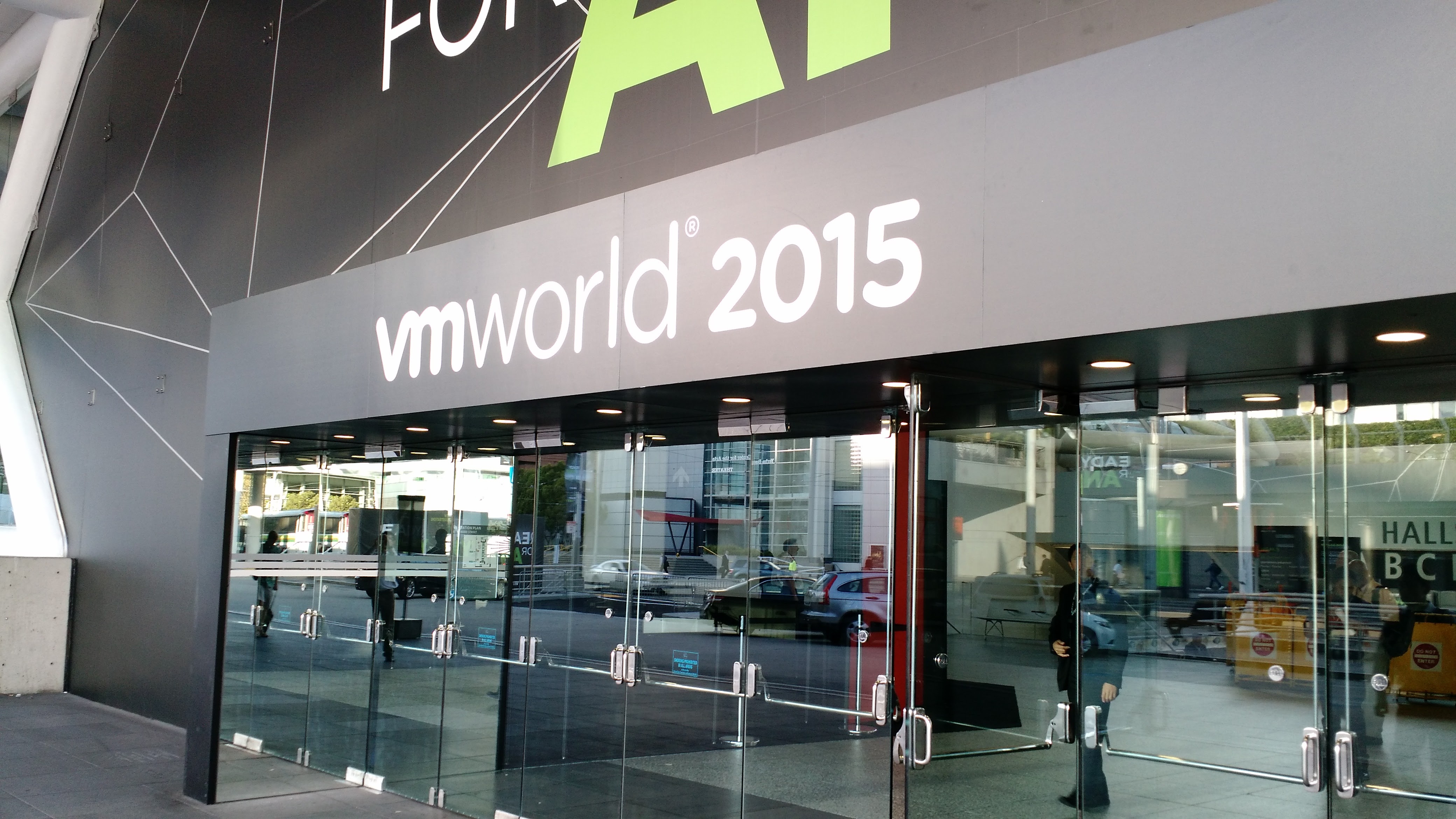 Above: At VMware’s 2015 VMworld conference in San Francisco on Aug. 31.

The big picture here is that VMware is finally going to provide a ready-to-go piece of software to let companies live the vision VMware has been talking about for a year or more: the grand “software-defined data center” that SDDC stands for.

VMware previews Project A² for managing Windows 10 devices and apps 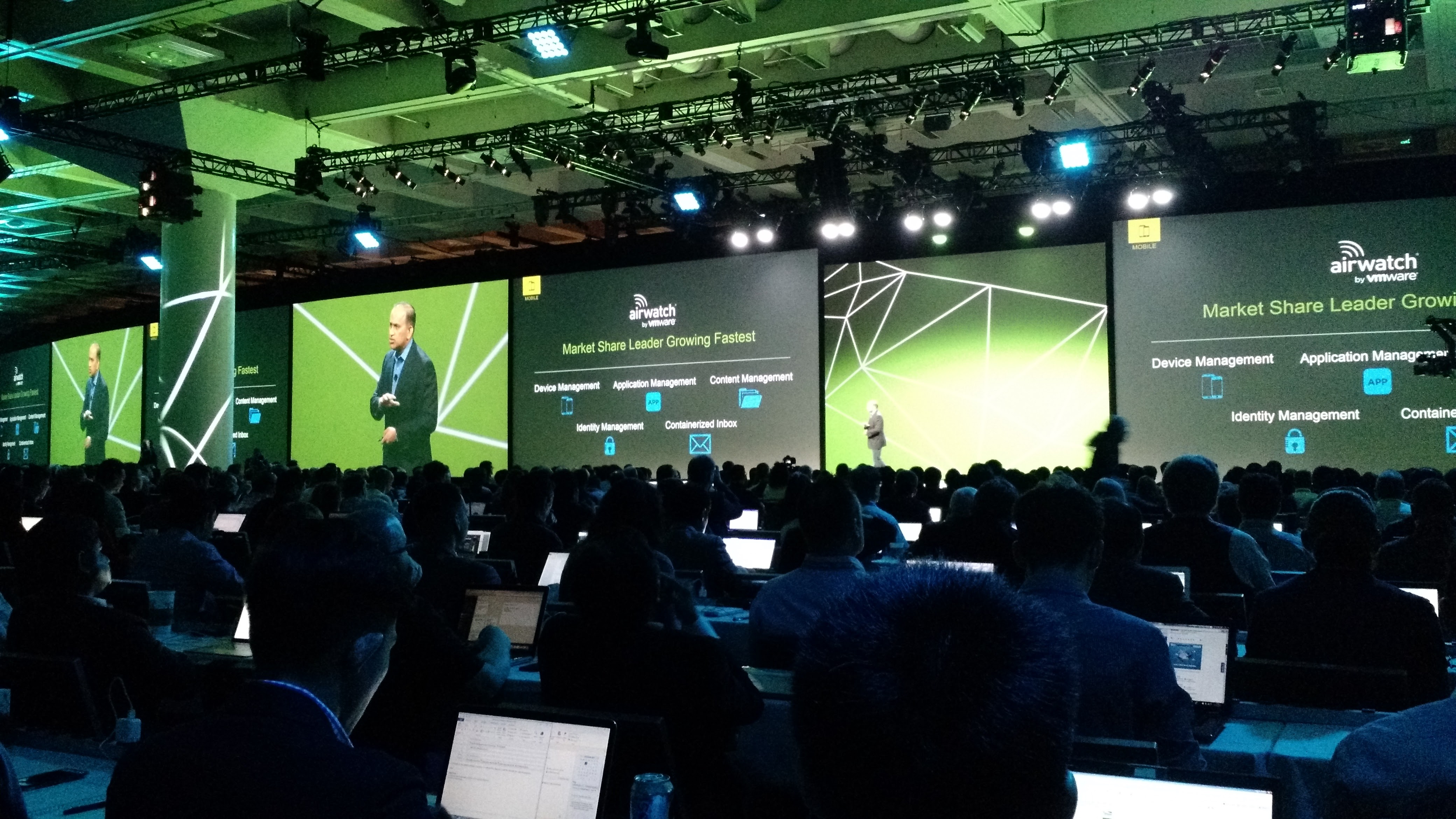 Above: VMware’s Sanjay Poonen speaks at the company’s VMworld conference in San Francisco on Sept. 1.

Typically, VMware’s AirWatch division would sell enterprise mobility management software for managing physical devices, and separately VMware would sell its App Volumes software (formerly CloudVolumes) for deploying applications to virtual desktops. Now VMware is bringing these two things together in Project A² (pronounced “A-squared”), with the combination of VMware App Volumes and AirWatch.