VMware today announced a technology preview of Project Bonneville, a runtime that will allow companies that have invested in VMware’s vSphere virtualization software to run applications packaged up in Docker containers inside of virtual machines.

The work is strategically important to VMware, as its virtualization technology helped the company become the enterprise heavyweight that it is today. The open-source container technology that the startup Docker has made more accessible in the past couple of years might not be as widely used among enterprises now, but VMware recognizes its disruptive potential.

Indeed, the company’s most recent annual report states, “We also compete with … emerging container technologies like Docker and Rocket.” So VMware has been partnering with Docker and building software that lets its customers take advantage of containers.

Project Bonneville should become available as a private beta in the third quarter of this year, a VMware spokesperson told VentureBeat in an email. 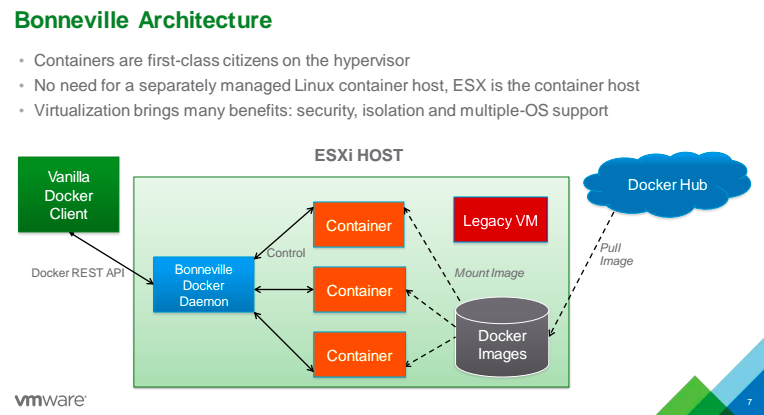 Above: A slide in a VMware presentation shows how Project Bonneville integrates with VMware’s vSphere virtualization software.

In addition to Project Bonneville, VMware today is announcing a technology preview of a hypervisor called AppCatalyst that lets developers replicate cloud environments on their local computers in order to test out applications. VMware today is also demonstrating that it can implement microsegmentation for security purposes in the context of Docker containers with its NSX network virtualization software.

“Having containers run on top of a virtualized network in production, not as a demo — I think it’s still a relatively new thing,” Guido Appenzeller, VMware’s chief technology strategy officer for networking and security and formerly a cofounder of Big Switch Networks, told VentureBeat in an interview. “I think it’s a sign of the container space maturing.”