It’s a fortunate man who can blow through $35 million one week, only to be offered $12 million the next.

For serial entrepreneur Steve Blank, this story sums up the ethos of Silicon Valley. The day he experienced the most monumental failure of his career, upon the demise of Rocket Science Games back in 1997, Blank bumped into an old friend at a Palo Alto coffee shop.

“His first words to me were, ‘Steve, when do you start your next company?'” Chuckling, he added, “Where else do you hear that?”

Instead of going into hiding to nurse his bruised ego, Blank did what he usually does. He started another company. Epiphany, an enterprise software tool for marketers. He took Epiphany to an initial public offering in the height of the dotcom boom, then netted $329 million for the company in 2005, when it was acquired.

In all, Blank has founded eight companies. He told me he would have kept going if it weren’t for his wife and kids: “You get plenty of chances in your career, but only one with your family.” Through multiple business cycles, he has watched the technology industry thrive, perish, and thrive again.

I caught up with Blank, now retired, for a 30-minute chat the day after Marissa Mayer was named CEO, to talk about the real Silicon Valley, warts and all.

The story of Blank’s comeback is also one of his favorites to share with students. These days, he teaches a class at Stanford, Berkeley, and Columbia on how to build companies with a small budget, and quick and dirty engineering skills. This kind of thinking, which he describes as his “contribution of the last five years”, was coined “Lean startup” by his most promising student from Berkeley, Eric Ries.

Read more about the top classes for entrepreneurship in the U.S.

Blank has always believed that there is something fundamentally different about the culture of a startup. Most people still believe they are just smaller versions of corporations. That’s not the right way to think about startups.

“Large, established companies execute business models, startups search for them,” he explained. Blank told me this search is where the real fun begins. 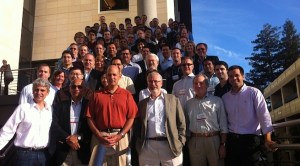 Above: Steve Blank with graduates of Stanford’s Technology Ventures Program

Credited as one of the founders of the “lean” startup movement, Blank’s star has risen. He has traveled the world to espouse his method for discovering and marketing to customers in a startup’s early stage.

Shortly after wrapping up our interview, I was cautiously approached by a bright-eyed engineer in a startup T-shirt. “Was that Steve Blank?” he asked. In Silicon Valley, my coffee companion — a white-haired man in horn rimmed glasses and jeans — is treated with the reverence that teenage boys ordinarily reserve for Jessica Alba.

For budding entrepreneurs, the barriers to entry are toppling down and that’s inspiring. Technology is enabling the lean-startup process by driving down the cost and talent required to develop new products.

Silicon Valley has transformed itself during Blank’s career as an entrepreneur. In a region that prides itself on constant innovation, it’s not often enough that we take the time to reflect. According to Blank, the “old boys club of venture capital” has evolved to become a meritocracy. No investor worth their salt would turn down a meeting with a promising entrepreneur, regardless or their age, gender, or race.

“There were no sit-ins or strikes,” said Blank. “Society became equal because we realized we could make more money by investing in the brightest.”

Still, Blank said Silicon Valley is not gender-blind yet. Grimacing, he said the venture capital community has recently become embarrassed by its treatment of women, although he did not mention the recent Ellen Pao – Kleiner Perkins case.

According to Blank, his female role models, “Marissa, Meg, and Carly,” are changing the rules of the game. “I’ve always liked smart women, they have to be twice as smart as the men in the room,” he said. With a twinkle in his eye, he added, “luckily, I have two daughters.”

The rise of ed-tech

As an investor and board member, Blank has dipped his finger in the proverbial honey pot. Currently, he sits on the board of IMVU, an online entertainment site. He gets most animated, however, on the topic of education technology.

“We have been hacking at this online education problem for over 50 years,” he said.

Blank explained that we are seeing the intersection of three trends that will make this click: the emergence of online classes on sites like Udacity (in which he’s an investor) and Khan Academy, the surge in venture capital investment in this space, and finally, the adoption of tablet computers that provide a mobile platform for learning.

This brings him back to a favorite topic, the ubiquity of the tools for entrepreneurship. Blank told me has traveled the world and been stunned by the passion for starting companies. He joked that in his twenties, the majority funneled their energies into rioting against the establishment. “On a college campus, the word business could have got you hung a decade ago,” he said.

To support the global movement for online education, Blank plans to make his Lean Launchpad curriculum, which teaches agile engineering and rapid customer acquisition, available online by the end of the year.

“There are hundreds of thousands, if not millions, of people who know what we know in Silicon Valley in cities all over the world like Santiago, Helsinki and St. Petersburg,” he said. “This is the real big idea: the democratization of entrepreneurship.”