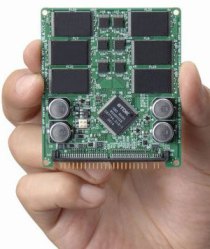 Anobit, a producer of flash memory technology, announced today that it has picked up $32 million in its most recent round of fundraising led by Intel Capital. It will use the funds to help meet surging demand for its products.

Flash Memory is usually better than traditional memory because it uses less power and is more reliable because it does not have any moving parts. It is also faster than most spin-up hard drives and obviously doesn’t generate any noise.

Today, flash memory faces the issue of only supporting a limited number of read and writes before the memory decays. Anobit specializes in adding a feature to its flash memory to improves the endurance.

Flash storage is becoming increasingly popular in mobile devices that do not require storage on the scale of most computers and laptops. Most cell phones and mobile devices have anywhere from 8GB to 32GB of storage in the form of flash memory, and the chip only needs about a half-inch of space.

Even Apple’s CEO Steve Jobs loves his flash memory, he said during the Apple earnings conference call (a comment he made in an attempt to dodge a question about running Flash animation on the iPhone, but the principle is the same). Apple, and many other companies, have come to use flash memory as the de facto storage mechanism in their gadgets.

But the memory is more expensive, so at larger scales — like hard drives for computers — it becomes less cost-efficient to purchase solid-state hard drives. A solid-state hard drive that’s large enough to be practical for a laptop or desktop — say something around 128GB — will cost around $225. Consumers can pick up a 640GB hard drive that uses magnetic platters for $70. Costs have been coming down over time, but they still haven’t reached the sweet spot to appeal to everyday consumers.

Today’s funding announcement brings Anobit’s total funding up to $70 million — a good chunk of change for a startup that came out of stealth mode three years ago. Anobit is based in Israel.