Booster, an app-based service that delivers and pumps gas in office parking lots, today announced that it has raised $20 million in funding in a round led by Conversion Capital. Other investors include Maveron, Madrona Venture Group, and the Stanford StartX Fund.

“Booster exclusively operates in lots where density is high so that we can provide customers free delivery and competitive pricing,” wrote Booster cofounder and CEO Frank Mycroft, in an email to VentureBeat. “We buy our gas directly from the source, so by cutting out the gas tanker middleman and gas station real estate costs, we pass the savings onto the customer.” 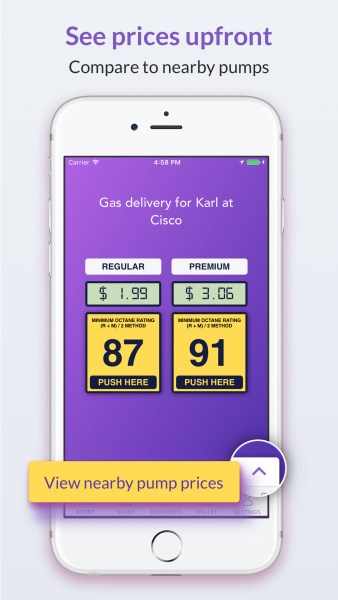 The startup provides free same-day delivery, with the option to pay a small fee for rush delivery options. Add-on services — such as window washing, wiper replacement, and tire check and fill — are also offered on certain campuses.

For now, Booster provides its service in the San Francisco Bay and Greater Dallas-Fort Worth areas, and the company plans on using the new funds to expand to other cities in the U.S.

When asked whether the team is thinking of providing mobile charging stations for electric cars like Teslas, Mycroft replied: “Our R&D team is looking at it and we’re excited about the prospects of serving consumers with electric vehicles in the future.”

Investors aren’t worried about the fossil fuel-based sector yet, though. “Fuel consumption reached record highs in 2016,” said Christian Lawless, managing partner at Conversion Capital and new Booster board member, in a statement. “While autonomous and electric vehicles are certainly the future, last year more than 99 percent of all new autos sold in the U.S. ran on conventional fuels, a trend we don’t see subsiding in the foreseeable future.”

Booster has raised a total of $32 million since it was founded in 2014. In addition to expanding to new markets, the startup will use the fresh injection of capital to increase sales and marketing and grow its team of 50.

Joining today’s round were previous investors, including Version One, Perot Jain LP, and RRE Ventures, as well as new investors BADR investments and U.S. Venture.