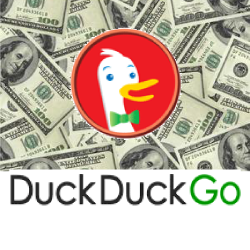 Duck Duck Go, which has a tiny percentage of the search engine market share in comparison to Google, doesn’t primarily base its results on algorithms. It also differs from other big search engines (Google, Bing, Yahoo) by not tracking its visitors the way that Google does.

Since launching in 2008, Weinberg has resisted the urge to take on outside investment until there was a compelling reason to do so.

“So why now? At the end of last year I noticed that the search engine started to really click with a greater percentage of people in a way that it hadn’t before,” Weinberg said, noting the company’s  zero-click info policy, privacy policy and goodies (a page of useful unit conversion and math tools).

Weinberg says the startup plans to use the money to hire new employees and expand its infrastructure.

Despite Duck Duck Go’s tiny market share of the overall search engine market, Union Square Venture’s Brad Burnham has a positive outlook for the startup. In a blog post about the investment deal, he writes: