With companies like Salesforce worth upwards of $100 billion, and incumbents like six-year-old Slack valued at over $7 billion, it would seem there is no better time to be a SaaS company. While this is true in many respects, especially in the U.S. where venture capital is flowing (allowing SaaS companies to scale quickly), the truth is that most SaaS companies don’t make it to even $1 million in revenue.

That’s right, just four percent of SaaS companies reach $1 million in revenue, and only .04 percent make it to $10 million. As revenue numbers increase, that number shrinks even more. With data like that, you’re probably as likely to win the lottery as you are to have a multimillion-dollar SaaS company. 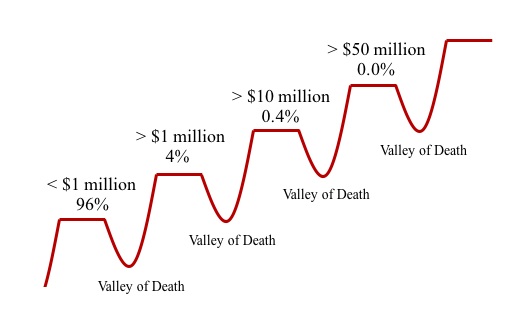 Getting to $1 million. Everyone wants to be a SaaS company

According to a 2018 survey from OpenView, SaaS companies reported having an average of nine competitors, up from two in 2013. Imagine being a customer and having to evaluate nine different products each time you want to make a purchase. Certainly there’s room in the market for a couple of major players, but it’s doubtful the other seven will succeed in an equally meaningful way. This is why market fit becomes so important, especially early on, and why companies that want to make it to $1 million should prioritize it.

So, what is product-market fit? Simply put: Your product fills a broad market need. You need to be the first or second startup to the table.

In a decade’s plus old blog post, Marc Andreessen wrote: “The market needs to be fulfilled and the market will be fulfilled, by the first viable product that comes along.” But, “In a terrible market, you can have the best product in the world and an absolutely killer team, and it doesn’t matter — you’re going to fail.” To get to the first million, SaaS companies shouldn’t worry too much about launching the most robust and feature-focused product. Rather, they should deliver a decent product fast.

Before our founding, our parent company came to the same realization. It had its  hands all over retail: e-learning, multiple partnerships, information kiosks, etc. But in 2008 it realized it was doing too much. This broad focus wasn’t working, and the company was forced to look critically at the business: What were our key strengths; which trends did we see in the market; how could we make our business model more predictable and more scalable? From there, it divested a lot of activities and, more importantly, formed the business we have today. We reached $1 million four years later.

Every growth phase has its challenges, and you can’t grow if you have the same mindset at each stage. If you’re lucky enough to have found market fit and made it to $1 million and are set on the next big metric, chances are you’re what Verne Harnish, author of “Mastering the Rockefeller Habits” calls a Gazelle: a small company experiencing hyper growth. This will be the most execution-focused phase in your growth and where it’s most critical to establish processes to evaluate and make decisions.

Here, the chances are good that you’ve hired a great team, who bring great ideas to the table. But working on all of these great ideas will slow you down. As a Gazelle, you need to execute on the right ideas and say no to other great ideas that are not right for you now. During this phase, the CEOs of successful SaaS companies define their priorities and objectives and focus on aligning everything: people, money, and processes on executing them.

We have personally experienced this. In 2010, we were seeing momentum in our product and the industry was lining up, but so was competition. We knew it was important for us to not lose our head start, so we took a huge step in expanding into the U.S. It was the right moment. How did we know? We started with desk research and developed milestones, taking the next step when each milestone was reached: hiring a local sales representative, then an implementation consultant, and finally signing on enough projects to support a team of three and signing an office lease.

Getting to 50 million: It’s about managing complexity

People do not buy products; they buy solutions. To get to $50 million, SaaS companies need to enhance their implementation capacity while they scale their product. Constant product development is key for long-term product survival. A more diverse product portfolio further enhances your market potential.

To get to $50 million, you need to have the team to support your product and implementation pipelines. During our recent growth phase, we looked back and realized we had never really invested in our brand as an employer or in our recruitment capabilities. Finding qualified personnel became a bottleneck to our whole growth strategy. As product cannot exist without the people to build it, we started hiring candidates who were “good enough” too fast. This caused major headaches and expensive mistakes. Further, with our international expansion, our organization was becoming highly complex.

Complexity generates three fundamental barriers: the inability to staff/grow enough leaders; a lack of systems and infrastructure to scale properly; and the inability to address market dynamics. As we move to $50 million, a big focus has been on trying to remove those barriers. Some of this comes from rethinking how our organization defines leaders. But for every organization, there will be different challenges.