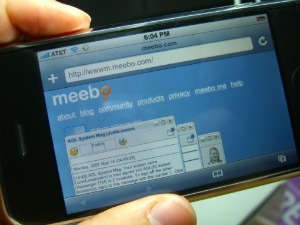 Online-chat and content-sharing provider Meebo is closing a $25 million round of funding led by Khosla Ventures, the company confirmed, as investors try to muscle in on every aspect of the burgeoning social networking space.

It has also created a “Meebo Bar,” which appears at the bottom of websites searched and then routes users to specific brands that match their past preferences and searches.

Once there, the average user spends 60 seconds looking at one of Meebo’s 8,000-plus publisher partners, nearly double the amount they would spend watching a traditional television ad.

The recent funding news coincides with the company’s launch yesterday of a new browser extension called the Meebo MiniBar, which will be more general than the Meebo Bar and let users share when they check in to websites, but not which particular page they are on or what they are doing.

Meebo CEO Seth Sternberg told All Things Digital, which originally broke the news pre-announcement, that 87 percent of the company’s advertisers in 2009 returned in 2010, with the Meebo Bar achieving a 1 percent click-through rate. Advertisers on average doubled their budgets after that first year with the site.

That “catch all” rate has been making Meebo a prime target for venture capital shops searching for already overachieving startups and impressed by a site which has locked down more than $60 million since its launch in 2005.

“We’re really excited to be working with Gideon, Vinod and the rest of the team at Khosla,” Sternberg told VentureBeat.  “When we sat down with them, we truly had a meeting of the minds when talking about where Meebo is headed with web check-ins.  We think there is huge potential to navigate the entire Web by people.”

Sternberg also told TechCrunch that he puts Meebo’s success down to “building a product for normal people, not Silicon Valley,” and added that the company is tackling the discovery problem much more efficiently than past hot properties like Digg, StumbleUpon and Delicious.

“I think very few things are so broad that they reach most of the users on the Internet and this is one of those,” KV founder Vinod Khosla told All Things Digital.