Digital photo frames have been around for a while, but PhotoSpring — with its ability to store thousands of photos and videos for families to share with, for example, elderly relatives — shows how far they’ve come.

Those specs and prices are fine, but it’s the software that has some smarts. It can organize your photos by date or by person. You can run your finger alongside the menu, and it will scroll through thousands of photos to find a bunch of pictures you took in 2010. You can tell it to hide certain photos or let it automatically hide the bad photos. It can sort through your photos and look for good images with faces, colors, and sharp focus.

I’ve been looking for a photo frame for my mother, and this one comes pretty close to what I had in mind. Charles Huang, the company’s chief operating officer, showed me how he keeps 2,600 of his own family photos on a PhotoSpring frame. At a media event last week, he showed how you can automatically upload photos from iOS or Android smartphones, using the PhotoSpring app. Those photos are transferred via Wi-Fi to the frame itself, where they are stored. The photos displayed change throughout the day. You can send photos to the frame via the app by designating which device should receive the photos. 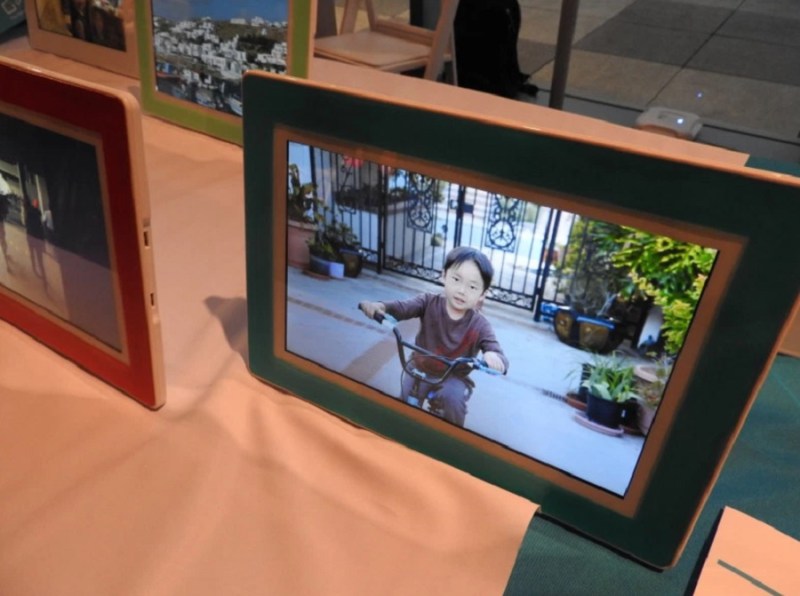 Above: PhotoSpring lets you store at least 16 gigabytes worth of photos in a connected photo frame.

You can pick the frame up from its stand, and it runs for about four hours on a battery charge, so you can move it around the house. The device doesn’t store photos in the cloud, but it can accommodate files such as JPG, PNG, and GIFs, and it can store MOV, MP4, M4V, and AVI videos.

Unfortunately, this frame isn’t fully loaded with features, in that it doesn’t have an SD card slot or cellular connection. Since my mother isn’t on the internet and doesn’t have Wi-Fi, it’s not going to work that well for me. I would have to upload photos to the device via Wi-Fi and then give the loaded frame to my mother to enjoy. But for a lot of people out there this kind of photo frame could help close the generation gap.

The Los Angeles company debuted in 2015 with a crowdfunding campaign, and it launched PhotoSpring earlier this year. It’s not perfect yet, but it sure is easy.