SleepScore Labs wants to deliver accurate sleep measurement, and it is prepared to do so without any new sensors beyond what many people already have in their smartphones.

Colin Lawlor, CEO of Carlsbad, California-based SleepScore Labs, said in an interview with VentureBeat that the company is taking its 13 years of experience in measuring sleep to a new level with a system that can measure your SleepScore, an index that evaluates your quality of sleep.

“In the big picture, you think of diet, exercise, and sleep,” Lawlor said. “You need to know more about each of these things to make informed decisions. We have scales to measure our weight. We have heart-rate monitors and step counters. But in sleep, there has been almost nothing. The challenge with sleep is we can’t remember anything about it. It has no measurement. We want to put SleepScore in everyone’s hands, for free, so people can understand their sleep and make decisions to improve it.”

There are already a lot sleep measurement companies out there, many that were born in the age of Fitbit and the Apple Watch. But Lawlor said that his company avoids having you wear sensors that you wouldn’t normally use with normal sleep behavior.

Some companies make you strap sensors across your chest to evaluate sleep-related measurements such as heart rate, heart rate variability, and breathing patterns. But SleepScore Labs uses its stand-alone SleepScore mobile app and the sensors on your smartphone — such as the microphones — to measure your breathing. Its sleep experts include Roy Raymann, former sleep expert at Apple.

“We have now collected more than 4 million nights of sleep research over 13 years,” he said. “So we have a more accurate picture of sleep in the lives of real people. Now we are evaluating products that make claims around sleep. Sleep is a $60 billion market. The problem is that half the stuff out there doesn’t work.” 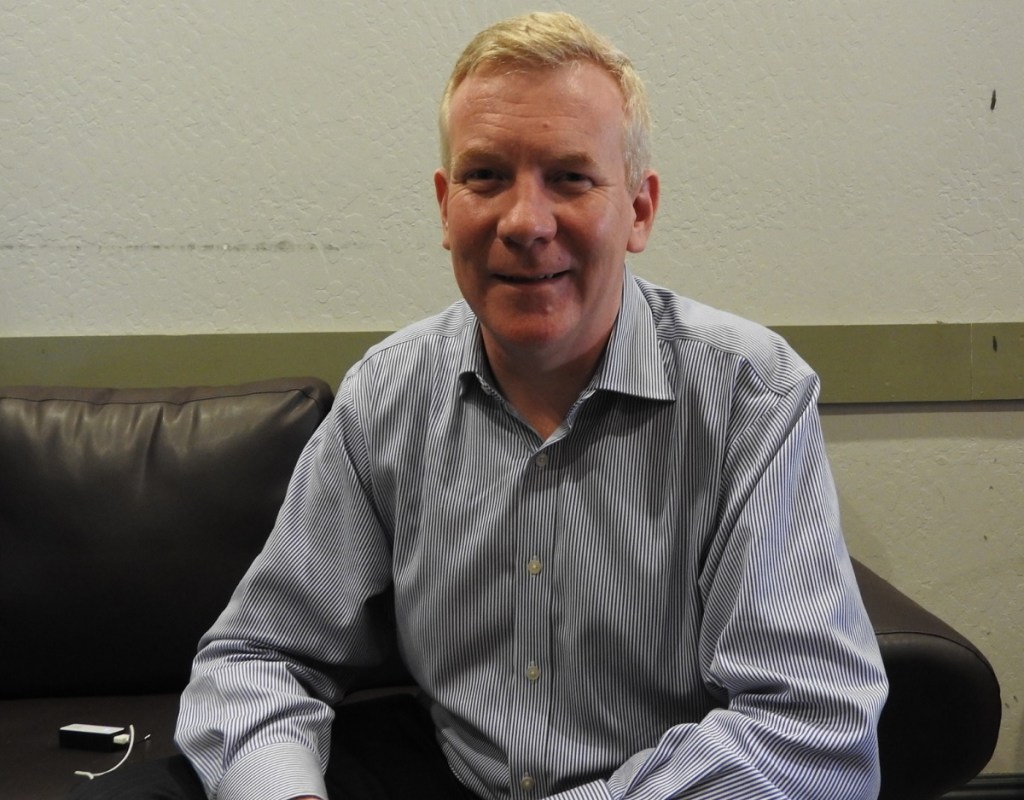 Another good thing is that SleepScore doesn’t require you to activate it before you go to sleep. Many apps need to be opened to start working, but that’s easy to forget when you’re about to hit the hay.

With the data it collects, SleepScore Labs’ app can give you customized sleep advice and recommendations. Powered by ResMed, a leader in sleep medical devices, SleepScore takes advantage of polysomnography research in accredited sleep labs around the world.

SleepScore’s sonar technology accesses a smartphone’s microphones and speakers to detect users’ sleep patterns without the need to wear uncomfortable obtrusive devices or place anything under their pillow or mattress.

The company converts the speaker and microphone in the smartphone into an accurate sonar sensor that can measure movement up to a tenth of a millimeter. That means it can measure heart rate, body movement, and respiratory movement. Once it digests the data, the app gives you personal advice.

Using the phone’s speakers, SleepScore sends inaudible sound waves, which are reflected off users’ bodies and received back into the microphone. The advanced algorithms then interpret the shape and movement of the reflected sound waves to sense breathing rate and body movements. The combination of these signals is used to accurately decipher movement through the various sleep stages at night. 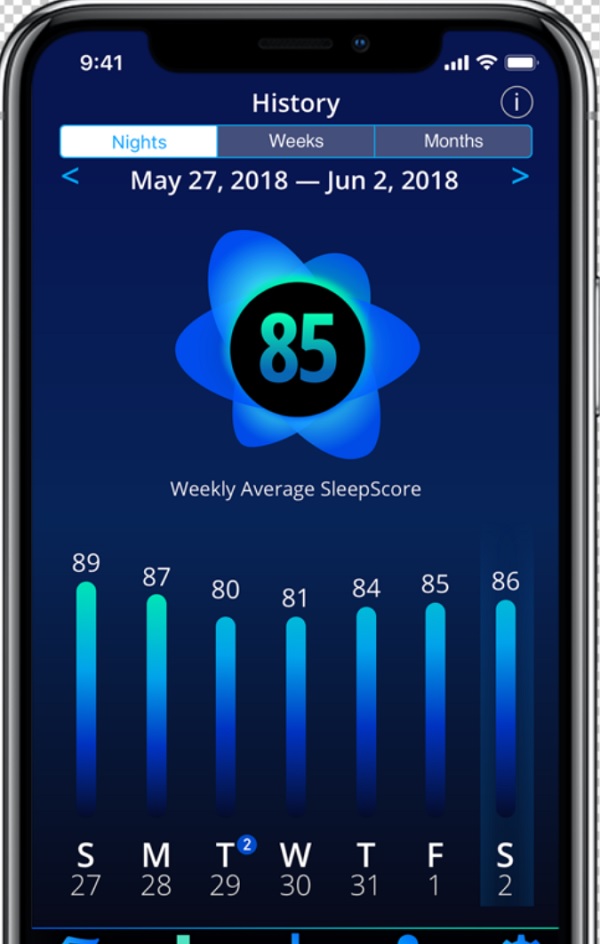 According to data collected by SleepScore over six million nights of sleep, about 60 percent of people misunderstand their own sleep problems due to a lack of measurable insight about their sleep patterns.

Moreover, upwards of 93 million Americans and as many as two billion people worldwide suffer from a variety of sleep issues, with many unable to access accurate tools for measurement to manage or improve sleep.

Some people have used consumer sleep trackers in the past, but found such trackers to be highly inaccurate, Lawlor said. Now, with the free SleepScore App, anyone with a smartphone can access their baseline SleepScore and gain actionable insight based on their personal sleep data to improve their overall sleep health, he said. 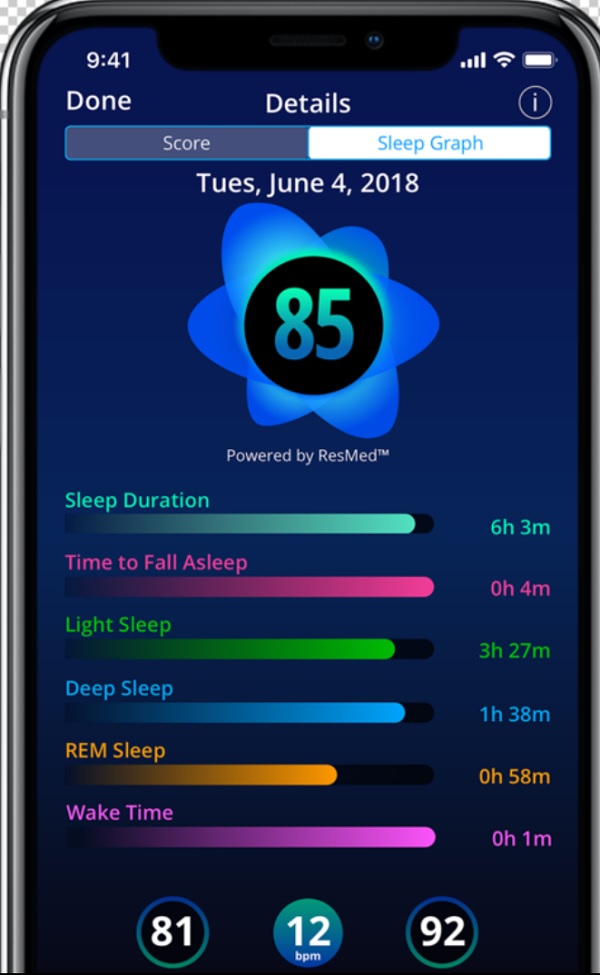 “Sleep affects all facets of people’s health, and yet there has been no easy way to accurately measure or track it everywhere we sleep — until now,” said Lawlor. “Together with ResMed, we’ve been developing this technology longer than the iPhone has existed, using leading edge sleep scientists and research resources to perfect the entire process and make sleep solutions available to everyone.”

He said poor sleep affects as many as 65 percent of adults in the U.S. The SleepScore app uses technology developed by ResMed over more than 13 years through their non-contact sleep-sensing algorithms. SleepScore also uses patented technology originally developed at the University of Washington. 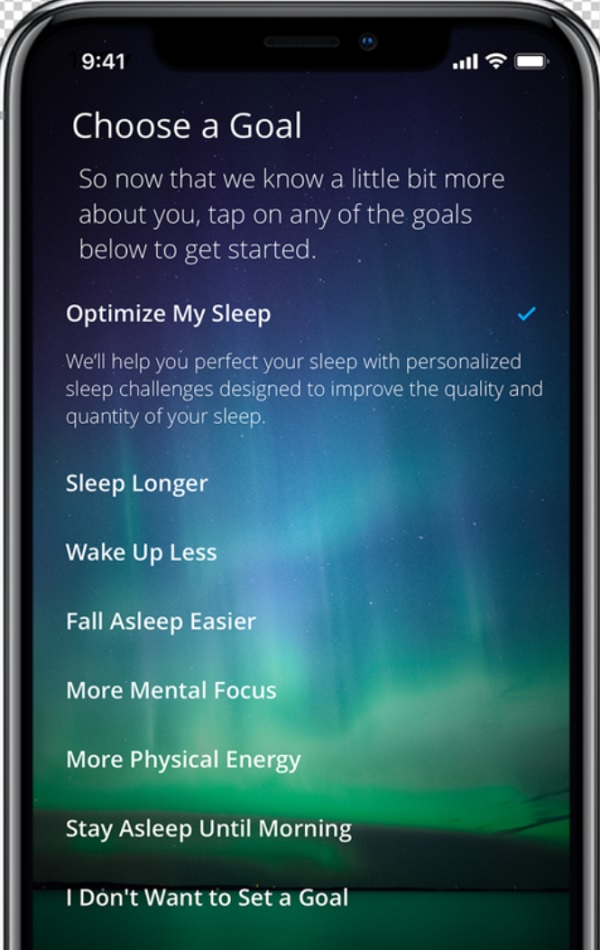 Above: SleepScore quizzes you about your habits.

SleepScore measures all stages of sleep, including wake, light sleep, deep sleep, and REM, as well as the number of times users wake up through the night and the time it takes to fall asleep, and provides the data in an easy-to-interpret SleepScore.

Among the people that SleepScore has advised are beach volleyball professional Gabby Reece, big-wave surfer (and husband to Reece) Laird Hamilton, and soccer star Cristiano Ronaldo.

“In the past, nutrition labeling on foods and wearable devices and technologies were developed so people could count calories and more easily measure the amount of exercise they were getting, but those tools only address two pillars of health,” said Lawlor. “Sleep has historically been neglected because it was technologically challenging and people can’t recall it accurately, so trying to figure out how to improve it was almost impossible. Now, this breakthrough free technology gives people the tools they need to change their sleep for the better so they can improve in all aspects of their health, from how they feel to their performance to their creativity, and, as the science is unfolding, to their risk of many chronic diseases.”

The app’s range of features give users the ability to choose their path to more restful sleep, providing them a range of tools and personalized recommendations. 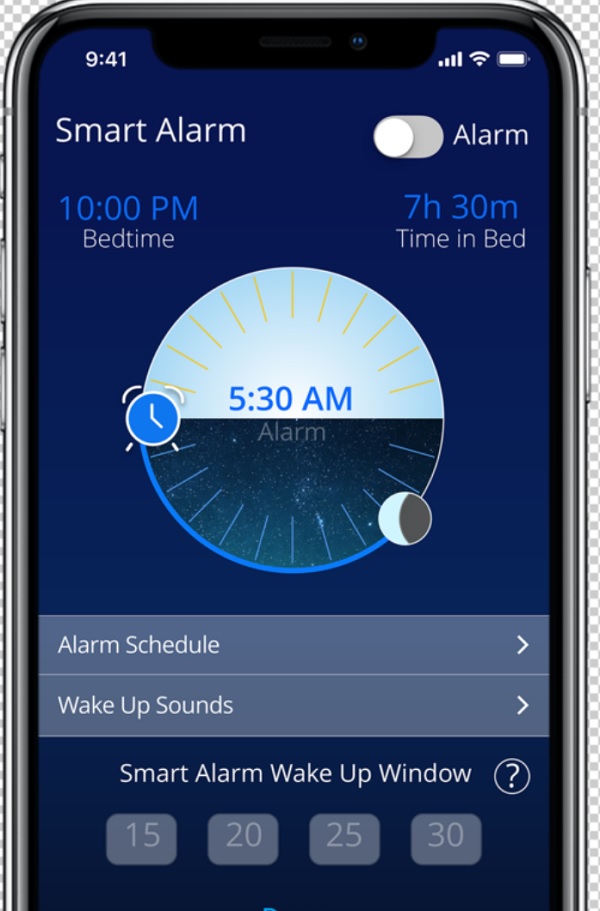 Above: You can set your alarm schedule and wake-up sounds with SleepScore.

The most notable features are:

The app is currently available to download and use for iOS from the App Store, with Android to follow before the end of June from Google Play. The free app gives people access to a nightly SleepScore, one week of sleep history, and a smart alarm that wakes you at the ideal moment in your sleep cycle.

A premium version is also available with a full sleep history, trend and correlations analytics, personalized sleep improvement advice, exportable data, and a sleep report for your doctor, among other features.

The company was created in 2016, a joint venture between ResMed, Dr. Mehmet Oz, and Pegasus Capital Advisors. ResMed is valued at tens of billions of dollars, largely based on its continuous positive airway pressure (CPAP) machines for addressing sleep apnea. Fourteen million people use the CPAP machines.

But those people don’t necessarily get the best information, and that’s what Lawlor is trying to address.

“Maybe 1 billion people suffer from some form of apnea,” Lawlor said. “Apnea causes lower energy levels. Hormones go down, and it hurts sex lives. You also need to optimize your sleep to properly manage your weight.”