Over the last decade, unicorns have completely transformed the VC landscape. They’ve tilting the funding scales toward a concentrated set of companies.

A decade ago unicorns represented a minuscule sector of the VC industry, with only six completed deals that represented just 1.2 percent of total deal value for the year. But a substantial shift happened in 2014. In just one year, unicorn financing grew from $2.6 billion to $13.6 billion — with more deals of this nature occurring in 2014 than the previous three years combined.

Fast forward to 2018: The overall number of unicorn deals is stable at roughly 1.3 percent of the total number of deals closed. Unicorns continue to represent a tiny share of the overall industry, but they consume massive amounts of funding. During the first nine months of 2018, unicorns attracted a staggering $19.2 billion — breaking 2016’s full-year record of $18.5 billion! In fact, the first nine months of 2018 have outpaced every year on record in terms of deal value. 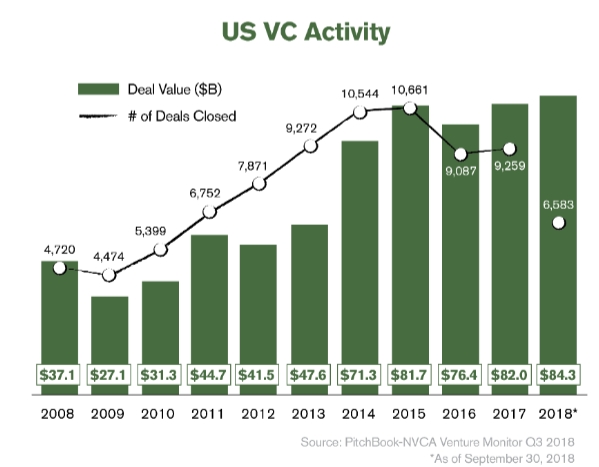 Essentially, 80 deals have attracted close to 25 percent of all the VC funding for the year so far.

Over the last decade, unicorns’ share of the funding pie skyrocketed from just 1.6 percent to over 23 percent.

With so much money chasing such a concentrated deal flow, reaching $500 billion, it’s no surprise that unicorn aggregate post-money valuations are growing rapidly. 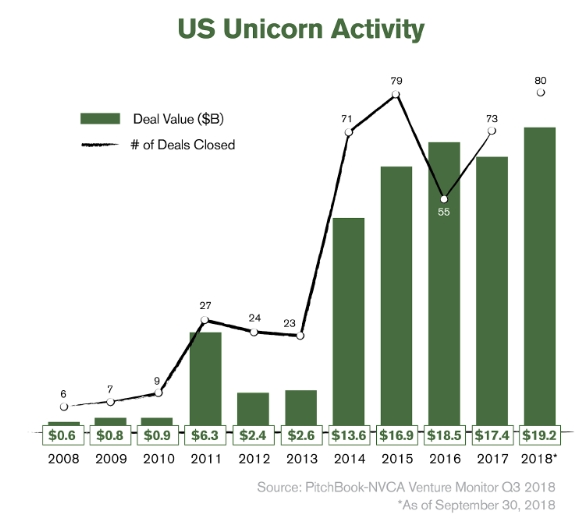 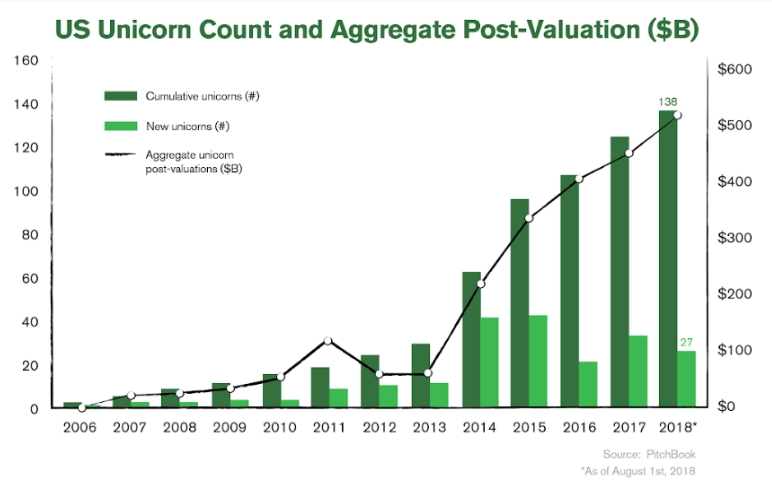 Additionally, average unicorn deal values continue to hover at record levels, with 2018 posting a significant premium over 2017 levels and on target to break the 2016 record.

Valuations are skyrocketing because of the constant and massive inflow of capital into a highly-concentrated asset class. This asset class is increasingly dominated by mega funds, spearheaded by SoftBank’s mammoth $100 billion Superfund. But what many don’t realize is that these mega funds are taking the place of a soft exit market, which is creating a vicious cycle of co-dependency, thus allowing unicorns to stay private longer. 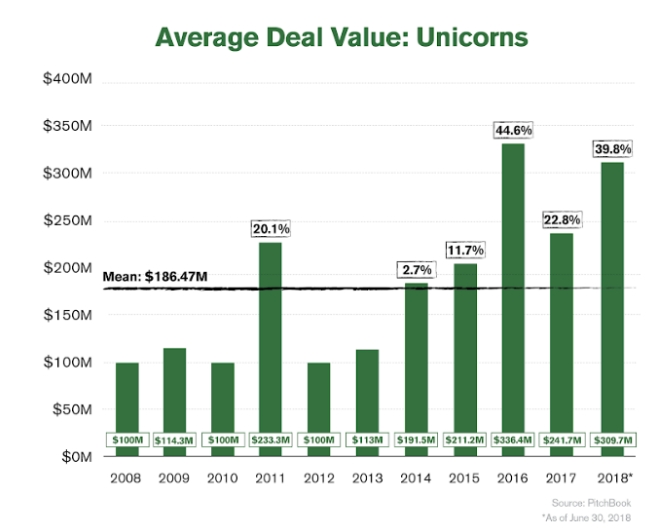 With the total exits so far in 2018 clocking in around $80 billion, exit markets are trending at a five-year average and the number of deals closed has been continuing on a downward trend since 2014.

While unicorns are hitting record activity, what is happening on the other side of the spectrum?

Both angel and seed round activity are on target for their lowest year since 2014, with substantial drops in number of deals closed. If this trend continues in 2018, angel and seed activity will drop by 51 percent since peaking in 2015. 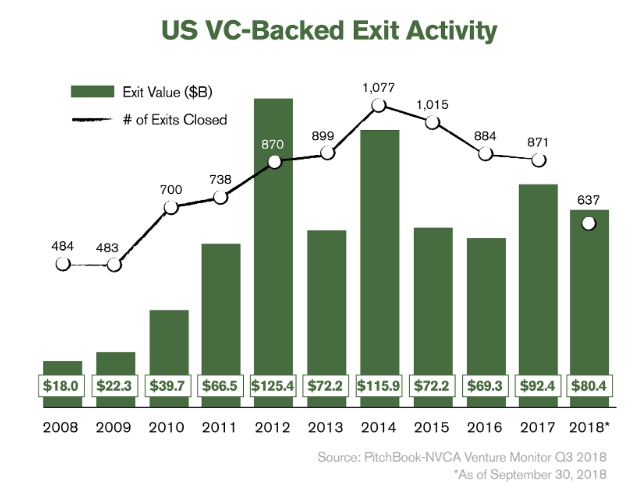 With a dramatic drop in deal flow, VC first financing activity is also having a lackluster year, continuing a cycle that started back in 2014. First-time deal count is actually expected to fall in 2018.

If the industry continues on this path, the number of deals financed will be back to early decade levels. In other words, the number of deals will be down by 40 percent since peaking in 2014, and first financing market share of total VC funding will drop from 15.6 percent to 9 percent.

On the other hand, because of such significant deal concentration, average deal size has grown by 150 percent since 2013 from $5.1 to $12.8 million and is now at a 42 percent premium over the mean.

With an influx of new capital being deployed toward unicorns, early-stage companies are having a difficult time attracting funding. The new Series A is the old Series B adage is quite real. 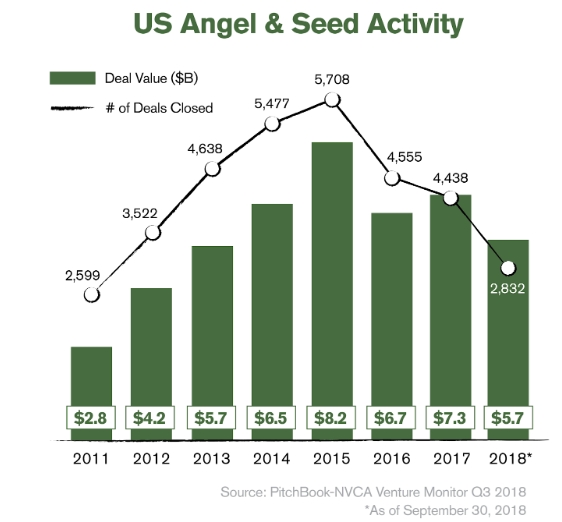 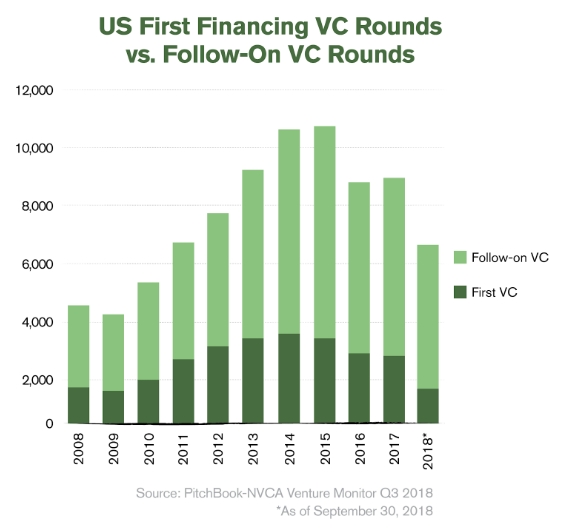 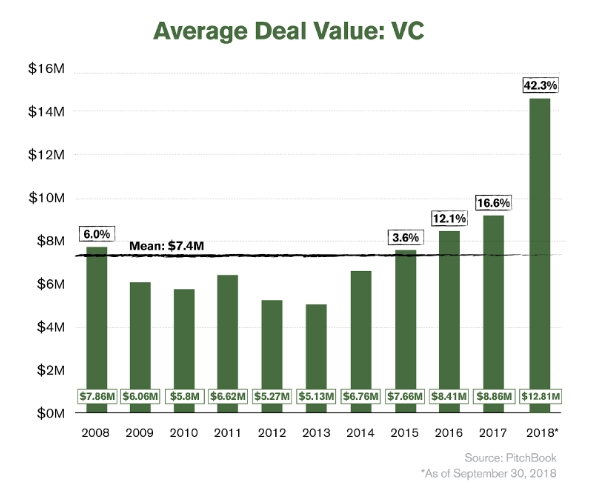 In order for an investment to matter, VC funds are growing larger and need to invest substantially more per deal. This leads us to VCs pursuing a much more concentrated investment strategy.

Early-stage companies looking to attract capital need to be more mature and demonstrate strong milestones before investors are willing to commit. The Valley of Death for startups has been tremendously elongated. This is creating the need for strong, early-stage players to bridge the gap between early-stage rounds before the company is ready to attract VC funding.

The great divide for early-stage companies is very real. Unicorn chasing has created a new asset class as well as a self-fulfilling cycle, where a few massive deals suck the liquidity available for earlier stage companies. This ultimately leads to significant deal concentration and substantial deal value inflation, which is creating a wasteland in early-stage funding.

Flavio Lobato is Principal and Co-Founder at Ikove Capital.