Online testing platform Optimizely said today it has raised a new $58 million funding round, which it will use to support its rapid growth in the web and mobile content optimization space.

The San Francisco-based company has become perhaps the best-known A/B testing platform for marketers, app developers, and publishers. Its customers use the platform to run comparisons of various content versions they present to users. The platform then returns analytics data showing which content worked best with various demographic groups.

Optimizely CEO Dan Siroker said the new funding round is needed now to help the company keep up with customer growth, and to expand its product offering. “We’re going to be hiring people,” Siroker said.

Optimizely says its revenues have increased more than 100 percent since its most recent funding round last May, with strong demand across retail, travel, media, and technology verticals. And the company’s head count has grown accordingly: In May of 2014 Optimizely had 192 employees; today it has 402.

Judging by that list, it appears that lots of investors wanted to get in on the round, which may have influenced the final amount. The round brings the company’s funding total to $146 million. Index Ventures partner Ilya Fushman joins Optimizely’s board. 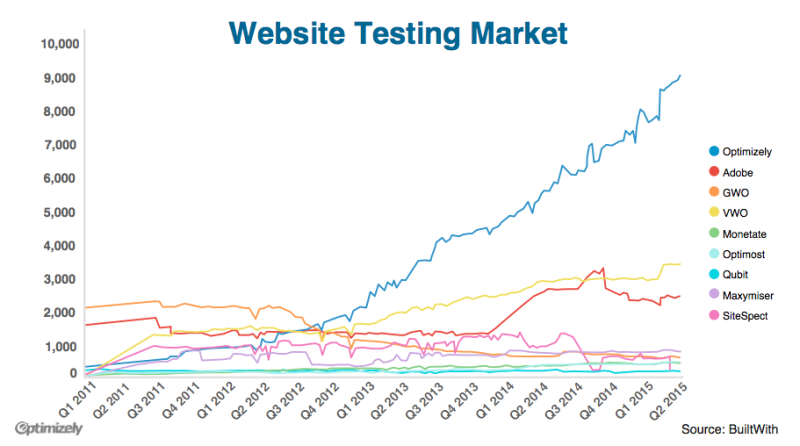 Optimizely has picked up a big chunk of market share in the burgeoning space. Its biggest customers include CNN (which uses Optimizely to see which of its headlines work best), Crate and Barrel, Intuit, Microsoft Store, Priceline, and Virgin America.

“It also has a free plan in its current pricing that is limited to certain features and 50,000 monthly unique visitors, which appeals to small businesses,” said VB Insights analyst Stewart Rogers.

“However, no conversion optimization tool has yet managed to provide every CRO (conversion rate optimization) feature in one,” Rogers said. “Optimizely would be well placed to win with a wider feature set, given its current market penetration.” (You can see VB Insight’s recent report on the CRO space here.)

Optimizely seems to be aware of the need to expand its offering. The company recently added a new personalization platform, which uses first-party and third-party customer data to customize content delivered to specific consumers. 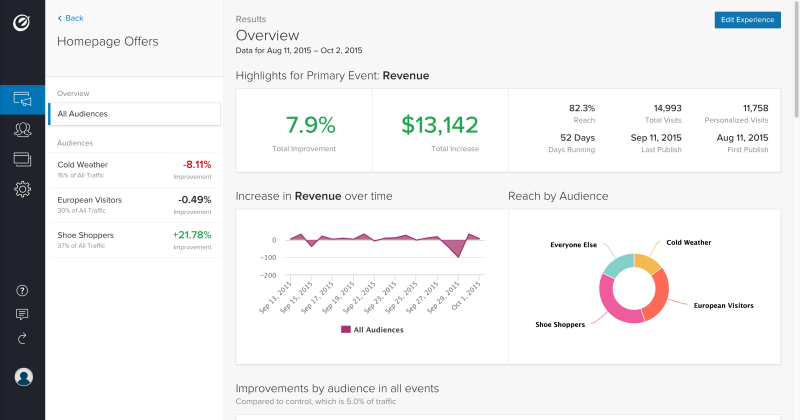 Above: The results screen from the Optimizely dashboard.

And there’s more to come. “We’re going to build out our platform for testing and personalization, and we’re also planning on rolling out multiple new products over the next year,” Siroker said.

Optimizely was identified as one of the leading vendors in the content-testing category in a September Forrester Wave ranking.

Forrester analyst James McCormick identified Optimizely as a “disruptive force in the online testing space,” crediting the platform with building out sophisticated enterprise capabilities, getting above-average feedback from customers on the usability and ease of use of its testing platform, and offering the strongest agency and services partner programs.

That last item refers to the fact that Optimizely integrates with many of the marketing automation platforms that customers already use. The company also has partnerships with consultants who work directly with businesses to set up and use Optimizely effectively, Siroker explained.

Siroker started Optimizely after serving as the director of analytics on the 2008 Obama campaign. “I saw an opportunity to address a pain point and make it easier to deliver relevant content,” he said during a phone interview Monday.

Seven years later, Siroker believes that web and mobile consumers still see a lot of content that isn’t tailor fit for them.

“Today, we live in a world which is still far from optimized,” he said. “We have a unique opportunity to optimize every experience, and this investment will take us one step closer toward this goal.”