Look at a typical advertising trade pub in 2019 and you’ll see headlines around big marketing-first brands like Apple and Nike, buzzy technologies like voice, AI, and blockchain, and rallying cries against power and privacy violations. In 2016 and 2017, it was virtual reality that dominated these headlines. But as those new tech trends emerged, those headlines stopped.

In 2018, we wrote about how we still saw yet tremendous demand for VR/AR advertising, having served 1 billion VR/AR ads. We learned three big lessons last year, namely that ad performance, turnkey distribution across platforms, and live in-market demos were the key to VR advertising success…not big headlines.

It’s 2019 now and the new year brings an entirely new learning: the key to broader mainstream VR advertising success is all about using lighter forms of immersive ad experiences. Why is this?

People today still think of virtual reality as a hyper-futuristic technology: giant headsets set in the sci-fi worlds of Black Mirror and Ready Player One. However, there is still a lack of mass adoption of these headsets that’s needed to put VR in a place of prominence and used in the real world, not a made up one.

Even so, this has not stopped advertisers from leveraging the fundamental concepts of VR to get better audience engagement in their marketing campaigns — a very pragmatic objective. Fundamentally, virtual reality is about creating a digital experience that goes beyond typical flat, 2D content. Using this definition, different types of content can harness this underlying concept to create technologies that create a similar, but lighter, experience to virtual reality. Call it bang for buck — no headset required. 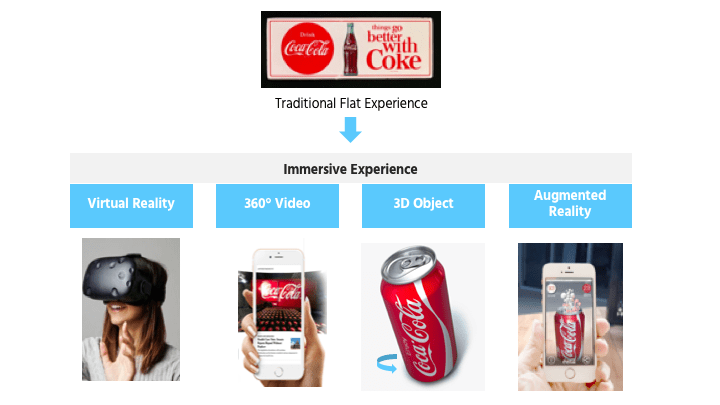 Why are brands moving from flat to immersive content?

Before understanding the different approaches to lighter immersive content, it’s critical to understand why brands are investing in immersive content at all. Any shift in creative approach requires effort and exploring the unfamiliar, so how do brands come to the decision to transform their ad content?

Ultimately, it’s not about trying the “cool, new thing.” Rather, it’s about advertising performance — the actual goals on clicks, views, and engagements that marketers use to measure success. This was true in 2018 and it’s still true in 2019 (and will hold true in 2020, 2021 …).

Trying new content formats is an investment, and companies need to be able to justify that investment. To create ads that engage audiences and increase sales, brands are increasingly turning to immersive content for performance reasons.

For instance, Cathay Pacific found great marketing success through an immersive ad campaign. Immersing viewers using 360° video technology, they allowed potential customers to experience how it feels to travel with their airline from checking in at the airport all the way to lounging in their cabin. The brand found it easier to distribute these experiences by having people view on mobile and desktop, rather than plug in a headset, which enabled the campaign to reach more people and perform better.

This ad campaign not only saw higher than average click-through rates but also increased unaided awareness by 29%, brand favorability by 25%, and preference for airline 12% compared to control ads that used the same creative and targeting, but were flat and 2D. In other words, by using immersive content, Cathay Pacific found both increased ad engagement and significant sales uplift, when measured by clicks and cost-per-conversion.

Fitting immersive format to the goal

Brands today are deciding which “lighter” immersive format is appropriate for their needs based on their business and marketing performance objectives.

Above: Options for immersive advertising

VR advertising today, in anticipation of the future

So what is the current state of VR advertising?

Due to the lack of physical headsets used by consumers, there is a limit put on VR advertising capabilities today. As a result, companies, instead, utilize the fundamental principles of VR advertising without using VR itself.

And this is catching on. The latest ad industry trends indicate that creating using immersive ads is becoming easier & easier.

Above: A lighter form of immersive advertising

While, ultimately, with the advancement of technology, the economy will shift towards physical VR headsets and VR ads, we see companies utilizing the underlying concepts of VR to more easily create immersive experiences that can be distributed at scale.