Traffic from Reddit and StumbleUpon might make you feel good for a moment, but it’s the web equivalent of junk food. By contrast, visits from YouTube, Google+, and LinkedIn are rich in minerals and vitamins: the highest quality web traffic you can get.

Six months of sharing by 250 million people says that YouTube drives some of the most valuable web traffic of any social site, according to a study published by social sharing and analytics company Shareaholic this morning. Visitors from YouTube stay on your site the longest, click around to find more information the most, and “bounce” (or leave immediately) the least. 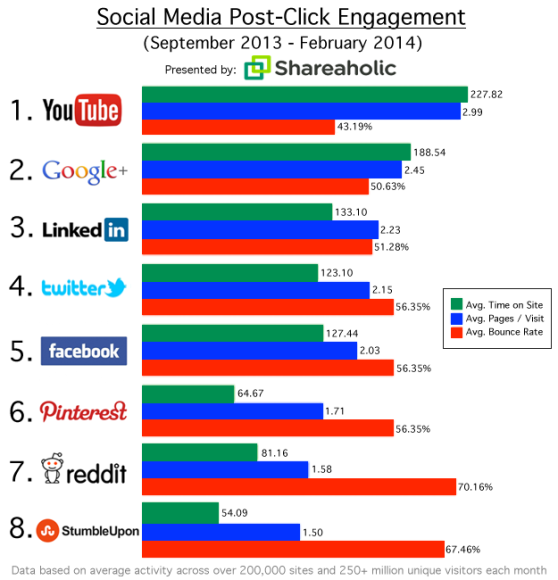 “YouTube is the undisputed champion,” study author Danny Wong told me via email this morning. “YouTube drives the most engaged traffic with an average 43.19 percent bounce rate, 2.99 pages per visit, and a 227.82 second visit duration.”

People who come to your website from Reddit and StumbleUpon, on the other hand, bounce hard. Over 70 percent of Redditors click away from your site after reading the one piece of information they came for, and StumbleUpon drives only 1.5 pageviews per visit.

While Google+ and LinkedIn aren’t quite in YouTube’s league, they both drive more engaged traffic than social giants Facebook and Twitter, making them something of an untapped resource.

“Although many sites see minimal traffic from both Google+ and LinkedIn, now may be the time to invest in building communities within those networks if engagement really matters to your business,” Wong wrote in his post.

One-time social media golden child Pinterest may not be the traffic monster it once was. Shareaholic ranked Pinterest sixth behind Facebook, Twitter, and Google+, due to the fact that Pinterest-referred visitors bounce just as often as Facebook and Twitter users but view even fewer pages and spend less time on site — just over a minute.

Traffic is a major concern for most website proprietors, not least of which are Internet retailers, who work hard at increasing “organic” traffic, or website traffic that is not paid or ad-driven. Websites that do well at driving organic traffic have the chance to increase revenue via sales or advertising, without having to pay directly for the traffic in the first place.

Shareaholic’s study ranged from September 2013 to February 14, and includes social actions on over 200,000 websites by 250 million web surfers.