A week ago, Google suddenly removed Adblock Fast from its Android app store. Today, the ad blocker has been reinstated, enabling Samsung users to download it once again from Google Play.

Late last month, the browser preinstalled on Samsung’s Android phones gained support for content-blocking plugins, and the first plugin to support the functionality was a free and open-source solution called Adblock Fast. Rocketship Apps, the maker of Adblock Fast, uploaded the Android plugin on January 29, but Google rejected an app update on February 1. The app hit Google Play’s top spot for free, new productivity apps on February 2, and was pulled by Google on the same day.

Adblock Fast submitted an appeal on February 1, the day the app update was rejected. In response, Google reversed its decision on February 5, accepting the appeal and republishing Adblock Fast on February 9 (today). Rocketship Apps developer Brian Kennish shared the email Google sent over:

Thanks for contacting the Google Play Team.

We’ve accepted your appeal and your app has been reinstated. For the app to appear on the Play Store, you’ll need to sign into your Developer Console and submit your app again.

Please let us know if you have any other questions or concerns.

Thanks for supporting Google Play!

To be clear, the app update on February 1 wasn’t at all significant. “The update that Google rejected was actually just a change to the app description – we hadn’t even submitted a new APK,” Kennish told VentureBeat.

The update to the app that went live today (version 1.1.0) extends support to Android 4.0 and up while also clarifying the onboarding user experience for those who don’t yet have Samsung Internet 4.0. “We wanted to make these onboarding changes last week since lots of folks who hadn’t gotten Samsung’s 4.0 browser yet were confused about how to use the app and were leaving 1-star reviews, but we never got a chance to,” Kennish added.

Nonetheless, the app is back. The Adblock Fast homepage has been updated from “Find out when Adblock Fast is back in Google Play!” to the previous message: “Find out about Adblock Fast updates first!” 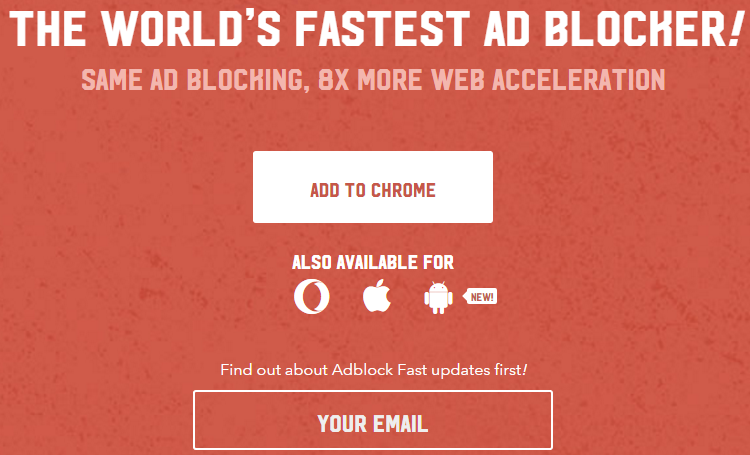 While Adblock Fast was the first to partner with Samsung, two other ad-blocking solutions quickly joined: Adblock Plus and Crystal. They, however, were not pulled and have been available on Google Play this whole time.

But last week, Google gave the same reason for removing Adblock Fast, stating that it was “interfering” with third-party apps. Google cited section 4.4 of the Google Play Developer Distribution Agreement. For reference, that section reads as follows:

Rocketship Apps insisted that Adblock Fast only interacted with Samsung Internet browser and only used Samsung’s API. Google issued a vague statement last week that didn’t explicitly confirm removing the app. “While we don’t comment on specific apps, we can confirm that our policies are designed to provide a great experience for users and developers,” a Google spokesperson told VentureBeat at the time.

A source close to the situation told VentureBeat at the time that Google considered this a “unique case” because two apps are required to invoke the ad blocking. Furthermore, the source added that Google has no problem with browsers which can block ads within themselves via built-in functionality (like Adblock Browser) or via plugins. Whatever exactly was going on, it appears the decision has been reversed.

We have contacted Google for more information as to what made the company reverse course and will update you if we hear back.

A source close to the company did, however, say that Adblock Fast was reinstated on Google Play because Samsung offers an adblocking API that lets third-party developers create apps that allow ad blocking within its mobile browser. Google wants to continue allowing apps to integrate with one another through authorized channels (like APIs) but will continue to prohibit apps on Google Play that interfere with the functionality of other apps in an unauthorized manner.