Updated at 6:01 p.m. (PST) with a response from Matcha.tv CEO Guy Piekarz. Update #2 at 7:35 p.m. with clarification on the acquisition price.

Apple’s latest acquisition is the recently-shut down second-screen TV/video app Matcha.tv, according to a source with knowledge of the deal who asked to remain anonymous.

Matcha.tv was an iOS app that provided a comprehensive overview of everything that’s available to watch via cable TV providers (Comcast), streaming video services (Netflix, Hulu, Amazon Prime), and digital video stores (iTunes, Amazon). Additionally, you could manage what you watched from a universal queue, get video recommendations, and connect with social networks to see what your friends were watching/liking.

However, the service shut down back in May with little explanation. Matcha.tv CEO Guy Piekarz previously told TechCrunch that the service wasn’t gone for good, but instead would be working on a new direction.

Apple responded to VentureBeat with the following comment: “Apple buys smaller technology companies from time to time, and we generally do not discuss our purpose or plans.” (It’s virtually the same comment the company provides when asked about all its recent acquisitions.) Piekarz declined to comment to VentureBeat.

As for the deal, Apple is said to have purchased Matcha.tv for an estimated $1 to $1.5 million, according to VentureBeat’s source. Yet, the final amount could have been much higher, considering that Matcha.tv was seeing regular growth and was routinely ranked among the top 15 entertainment apps listed in Apple’s App Store. Another source tells VentureBeat that the purchase price is definitely incorrect, but couldn’t comment further.

So why Matcha.tv? The company doesn’t have any valuable patents or a large user base. What it does have is a very nice service that maps out all the available content both online and on your TV. And while Apple hasn’t been very specific about its plans to revolutionize the TV industry (besides acknowledging that such plans exist), buying this service could suggest Matcha.tv’s technology is in line with those future TV plans. 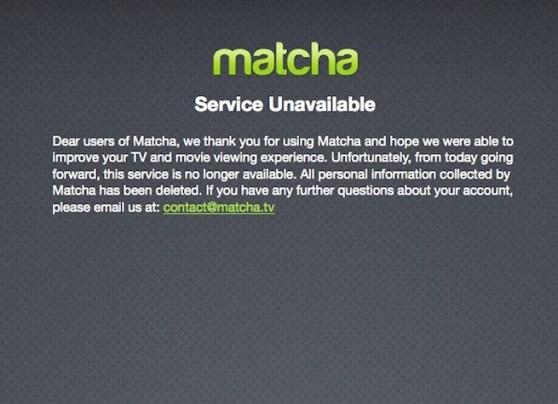