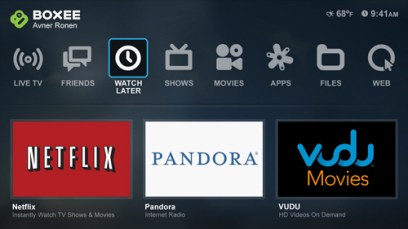 Sorry, Boxee faithful, you won’t be getting any more updates on your computers after the release of Boxee 1.5.

The media streaming software company will be shifting its focus entirely to connected TV devices, tablets and smartphones, it announced yesterday on its blog, together with the unveiling of Boxee 1.5 for Windows, Macs, and Ubuntu Linux.

The news reflects a major shift in the landscape of home theater PCs. It used to be that you had to install and configure software like Boxee to enjoy digital video in your living room. Now, with the proliferation of cheap and easy-to-use devices like the Roku set-top box, as well as TVs and Blu-ray players with support for apps like Netflix, the HTPC of yore seems irrelevant.

“While there are still many users who have computers connected to their TVs, we believe this use case is likely to decline as users find better alternatives,” wrote Boxee’s Andrew Kippen. “People will continue to watch a lot of video on their computer, but it is more likely to be a laptop than a home-theater PC and probably through a browser rather than downloaded software.”

Boxee, which began as a fork of the XBMC media center software, was initially very popular with techies thanks to its wide support for video file types and slick user interface. But now the company needs to focus on a wider audience. That began with the release of the Boxee Box last year and continued with the launch of its iPad app this summer.

As for the Boxee 1.5 update, it sports a refined interface, as well as additional details about movies and TV shows. The update will be available on Boxee’s website until the end of January, at which point the company will likely erase any trace of its HTPC past from the site. The update will hit the Boxee Box in January alongside the release of the Live TV USB stick.