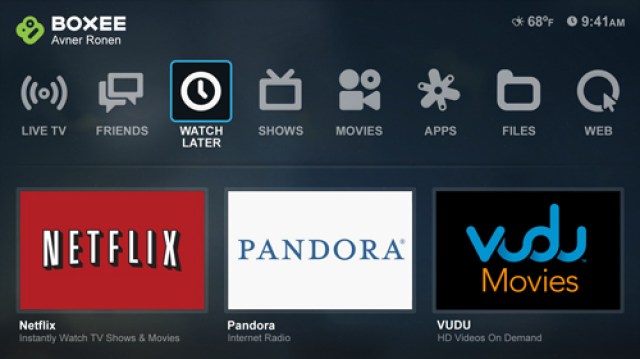 Boxee is rolling out some major updates to its connected television platform today, including a new software update to support the company’s Live TV stick product, which goes on sale today.

The Boxee Box is a streaming set-top box featuring Boxee’s open-source media software, which transforms televisions into internet connected media centers. The company announced back in November it would be launching Live TV stick, a $49 addon that acts a high-powered HD antenna to give Boxee Box owners access to local channels like ABC, CBS, Fox, CW and NBC with no monthly fee. Boxee is betting that the combination of free basic live TV channels with videos from services such as YouTube, Netflix, Vimeo and others will be enough for many people to end their expensive cable subscriptions (a.k.a. cut the cord).

The Live TV stick gives Boxee Box owners access to a new social channel listings section, shared via social networks (Twitter, Facebook, etc.). It functions basically like any other channel listing guide, but the biggest difference is that it shows you who else is watching a particular program in real time. While flipping through the available channels, this has the potential to influence what you watch. Of course, with the limited number of free HD broadcast channels available, the feature won’t have nearly the impact it could if added to the hundreds of channels available through a cable or satellite television provider.

The Live TV addon also includes a channel editing feature and a simplified user interface that makes it easy to flip back and forth between Live TV and OnDemand content. However, one thing that isn’t included with the Live TV stick update is DVR functionality.

“We’re aware that DVR is a popular feature request, but we want to make sure its a responsible use of resources,” Boxee VP of Marketing Andrew Kippen told VentureBeat in a recent interview.

Kippen said a DVR feature is definitely possible in the future, but the integration of the HD television broadcasts channels is mostly intended to quench Boxee users’ third for live content, like sporting events and breaking news coverage. It also makes sense for Boxee to hold off on adding DVR when you think about the multitude of OnDemand content available through Netflix as well as a person’s digital library of content that they own.

Boxee said it’s staggering the release of the software update over the next 72 hours. However, the Live TV stick is available for order now.

Screenshots of Boxee 1.5 below: