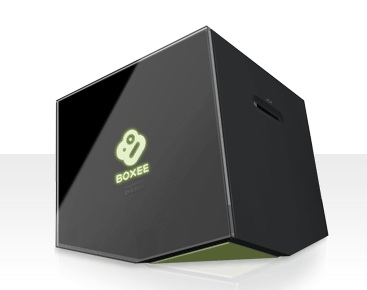 In a video released today, video streaming startup Boxee showed off the final version of its set-top “Boxee Box,” which is being produced by hardware manufacturer D-Link.

Boxee debuted the set-top box last year, and it instantly became hotly anticipated among media addicts. The company has been working on software that lets users bring Web video content to their televisions for the past few years, but thus far it has required extensive set up on a computer or Apple TV. The Boxee Box would be an easy plug-and-play way for consumers to bring Boxee’s software to their living rooms.

In the video, Boxee Chief Product Office Zach Klein describes the early Box prototype as a “student project.” It consisted of parts created with 3D printers in a process known as “soft tooling”, and it helped Boxee suss out the look and feel of the device.

He went on to say that the final version of the product “feels like a valuable device”, and that it “has a nice weight to it.” Unlike the prototype, the new plastic surface doesn’t show fingerprints as much.

Some might say that Boxee is a bit too late with the Box — it was initially supposed to arrive some time in the second quarter of this year. Since its announcement, Google went on to unveil its own ambitious plans for bringing web video to televisions with Google TV, which includes a set-top box from Logitech, and potential integration in cable boxes and televisions. Instead of being threatened by Google, though, Boxee CEO Avner Ronen said he sees Google TV as complementary to Boxee’s own service, and that he’s interested in developing a Boxee Android app to run on Google’s platform.

The company says the Box will be available some time in the fall — possibly late October or early November. Since D-Link is handling the entire production of the Box, Boxee has little control over when the device will be available.

View the video reveal of the final Boxee Box design below:
http://vimeo.com/moogaloop.swf?clip_id=13398124&server=vimeo.com&show_title=1&show_byline=1&show_portrait=0&color=&fullscreen=1