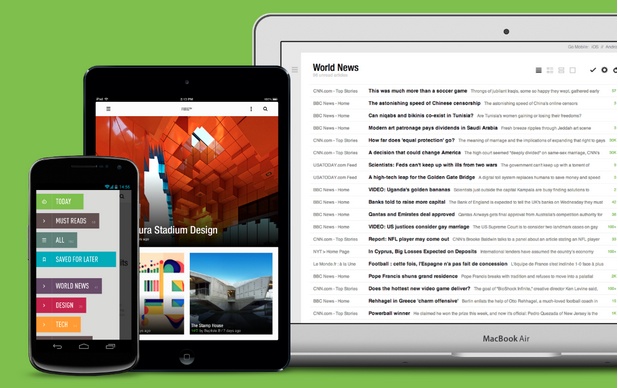 For Feedly, Google Reader’s impending demise has been nothing but good news.

Feedly emerged as the “natural” successor for Google Reader, as Reader users sought out a new way to get their news fixed. The startup announced today that it has clocked in 3 million new users on its mobile apps and web browser extensions, following Google’s decision to retire Reader. Feedly is also launching updated mobiles apps with a redesigned user experience, which should further cement itself as a true Google Reader replacement.

The changes are design-driven, making it even easier for the you to search for or discover feeds, as well as save and share them. Today, Feedly boasts 50 million feeds.

“The thinking behind this is that information is power,” Cyril Moutran, Feedly co-founder, product and strategy, in an interview with VentureBeat. “The content you find and mark on Feedly allows you to share and participate in conversations on specific topics: smart, interesting conversations that allow you to network.”

It’s true that there’s no shortage of other options for readers on the market. Feedly, though, quickly rose to be No. 1 news app on all app stores within the first 48 hours of Google Reader’s retirement announcement, onboarding 500K stranded “migrants,” including a huge influx of users on its  Firefox, Chrome, and Safari extensions.

Although we’re arguably far from the first version of Feedly’s product that was built late 2008, the spirit remains the same. At the outset, Feedly was thought out around the premise that the amount web content would grow indefinitely, and that we were likely to experience exponential device multiplication.

Moutran said: “We were thinking of designers, lawyers, mums… people who want to keep up to date with what is going on in their respective spaces but not just via social networks. That’s how we went into RSS and Atom, ie open feeds.”

The little known story of a French startup gone big

The story really began in 1997 when Moutran and Edwin Khodabakchian, now Feedly CEO, were “cubicle mates” at Netscape. When they started on Feedly in 2008, as is often the case with startups, a few of them started with informal advisory roles before materializing into a co-founding team.

Quite typically so, they aggregated around more “Frenchies” from the Valley… but also from France directly: for instance, they hired someone they found online, and with whom they used to work remotely, until they were convinced that it was a match for living and working in San Francisco.

It’s understandably very tempting to keep a “herd” behavior with your co-citizens when living outside your country of origin, but it often also can quickly hamper the growth of your company. Onboarding outside the original circle to allow for diversity, including local talents, is key: look at Storify or BufferApp, to name only two young and successful startups.

After a first phase of herding, Feedly switched up, allowing for the cross-pollination of ideas to really pervade its thinking: “The relationships become natural and you just want to work with the best, French or not… the most important thing is that the team allows us to make the jump from ideation to implementation.”
The key to that? Establishing a trust relationship that allows the key exchange of ideas.

When asked what would be the one challenge and advice he would give French startups in the U.S., Moutran’s response was swift: “When you’re in a team that comprises a number of French people, you’re naturally inclined to speak French but it should be avoided because it can easily create a sense of clique on the one hand and of exclusion on the other hand.”

Some of Feedly’s team members have taken on French lessons . “But with the current workload, they don’t even have time anymore,” he added.

Building a product like Feedly took 13-14 major iterations, largely inspired by user feedback, Moutran said. Understandably so, success cannot happen without a strong sense of belonging and community within the team… especially during what is seen by the company’s head of product as the most challenging time (the price for being #1, really): the indexing of hundreds of millions of feeds, code named ‘Normandy,’ consisting in “indexing the whole word of feeds, a truly extremely complicated task from an engineering perspective.”

In a nutshell, Moutran summed it up: “It requires discipline — it’s crucial not to exclude others, notably with the language.”

Liva Judic runs Merrybubbles Communications, a marketing and public relations agency dedicated to tech startups with an ambition to grow outside their home markets. A contributor to tech publications in the U.S. and Europe, she advises a number of startups and is also on the advisory council of The Greatest Pitch, which helps startups connect with seed funding.