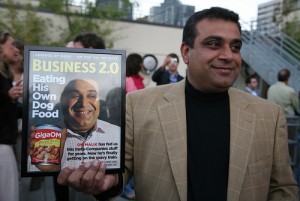 GigaOm already stands out as one of the most heavily-funded sites in the tech news world — and today it nearly doubled that funding, announcing that it has raised another $6 million.

Back when the San Francisco-based company had “only” raised around $8 million, I already found the funding “kind of remarkable”. The new total, $14 million, isn’t a huge amount for a tech startup, but it certainly dwarfs the amount raised by most competing sites. (VentureBeat, for example, has raised less than $1 million, while Business Insider has raised more than $6 million.)

When I asked GigaOm chief executive Paul Walborsky about the decision to raise more money, he responded, “We are big believers in building out a big company.”

GigaOm is certainly one of the most-respected names in the field, but thus far, tech blogs haven’t been acquired for enough money to justify a higher level of funding — the biggest deal has probably been AOL buying TechCrunch for $40 million. Walborsky said that he and founder Om Malik (pictured above) are confident that they’ve figured out a model that works and can continue grow. Rather than limiting its monetization efforts on GigaOm sites (which include GigaOm itself, as well as sites like video-focused NewTeeVee and cleantech-focused Earth2Tech), it sounds like the company sees the blogs as a way to build its brand. The sites also draw in potential new customers for its conferences and the research and reports sold through GigaOm Pro. The new money will mostly go towards building out the technology infrastructure behind Pro, Walborsky added.

“We believe that the growth of GigaOm is going to be driven by our research platform and GigaOm Pro,” he said. “That does not minimize the importance of our online audience. What we write about on the blog is what brings people to read GigaOm on a daily basis.”

GigaOm now claims more than 4 million unique monthly visitors across its sites, a number that’s growing 30 percent annually. According to Walborsky, the company doubled its revenue in 2010, thanks largely to GigaOm Pro. It’s on-track to double that revenue yet again this year, and to become cash-flow positive by the end of 2011.