Image-hosting platform Imgur is making it easier for publishers and bloggers to use its content, with the launch of a new embed feature.

Similar to how you can embed videos hosted on YouTube, content on Imgur will now have an additional “Embed” option in a little dropdown menu, which gives code for easy reappropriation on other sites.

This is what a typical piece of code looks like: 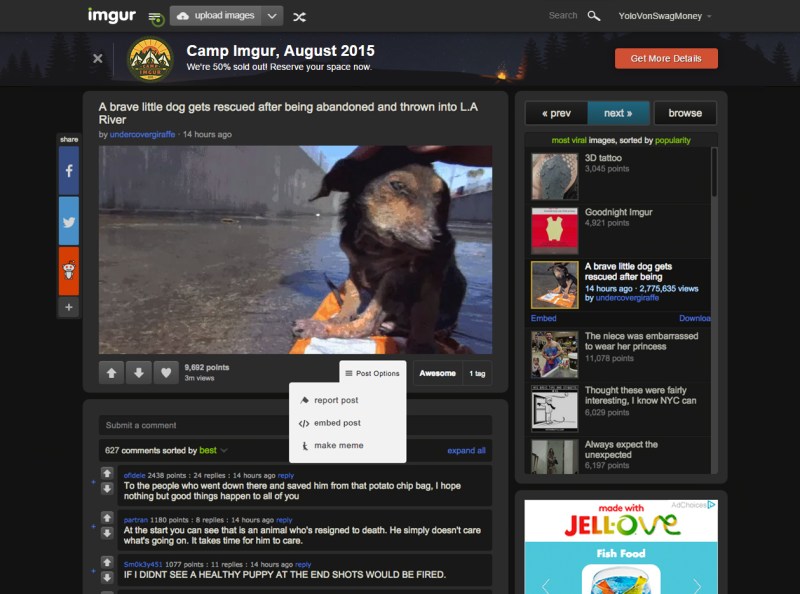 Founded in 2009, Imgur sees 1.5 million images uploaded every day, courtesy of 130 million unique visitors each month. In addition to a hosting platform for photos and animated GIFs, it’s also a community-based site with discussions, votes, and comments feeding into the service.

The San Francisco-based company has been building out its platform in recent times, aided in part by the $40 million it raised last year to refocus its efforts. Back in February, the firm launched a new tool to help anyone create animated GIFs from videos, before going on to revamp its content-discovery engine and rolling out an all-new iOS app to mark its sixth anniversary.

Thus far, anyone wishing to reuse Imgur content would have to save a photo to their desktop and reupload it to their own site, while remembering to include the proper credit. With this new embed link, however, not only does it remove the hassle of downloading/uploading a picture, but it also automatically includes attribution to ensure the original snapper is given due credit.

“There’s a massive ecosystem of publishers who regularly post content from Imgur to their own sites,” explained Chris Gallello, product manager at Imgur. “That said, it’s been an inconvenient process. With our new embed unit, they can easily do all of this by copying a single line of HTML and pasting it into their own site.”

“Embedding” content has become a popular means of helping companies gain mindshare and increase virality across the web, aside from the obvious example of YouTube. Facebook has let users embed posts for a while, and just a few weeks back revealed it would now allow videos to be embedded elsewhere on the Internet too. Earlier in March, Twitter too revealed it would let its users embed videos, having first introduced the feature for tweets in 2011.

The new Imgur embed feature will be rolling out today, and the startup says it has been built with mobile firmly in mind — embeds should display correctly irrespective of the device it’s viewed on.