It’s no secret that a huge portion of outside links shared on Reddit come from Imgur, the popular image-sharing service that brings over 4 billion page views and 80 million unique visitors a month. It’s also not much of a secret that Reddit users really love memes — the captioned images that act as inside jokes between Internet users.

So like the magical combination of peanut butter and chocolate, Imgur is making a very logical decision to launch its own meme generator tool today.

“Our community has been asking for an Imgur meme generator for a long time, so we hope they’re as excited about [it] as we are to deliver it to them,” said Imgur founder and CEO Alan Schaaf in a statement. “It just makes sense that, as more content is hosted and shared on Imgur, we continue to hand over content creation tools to our community. We can’t wait to see what they come up with.”

That means you’ll no longer have to go through the arbitrary process of creating a meme on sites like QuickMeme only to upload the final image to Imgur before sharing on Reddit. (Note: Redditors prefer all image links come from Imgur.)

The company’s decision to launch a meme generator tool also coincides with Reddit’s recent decision to black list QuickMeme itself after discovering that the site’s creator was artificially voting up his posts on the community news sharing site. Crime doesn’t pay, kids — and neither does gaming Reddit!

The Imgur meme generator tool was actually already in the works months ago, according to the company. It’s engineering team rushed to integrate the tool on the site to fill the void left by QuickMeme. 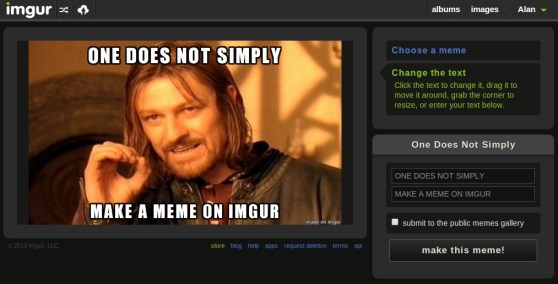 The meme generator tool itself — shown in the screenshot above — should prove as simple and effortless to use as Imgur’s image uploading and sharing experience. The company said users should easily be able to drag and drop text boxes on images, which will then be sized automatically to fit. There’s also a variety of classic memes (Scumbag Steve, Philosoraptor, overly attached girlfriend, awkward penguin, Good guy Greg, and others) for your convenience. I wouldn’t mind seeing the text a bit more polished, but I expect the tool will get better over time — just like Imgur has.

The meme generator tool comes just days after Imgur launched a new Android app, with plans to have a iOS app in the near future. Last year, the company also introduced a plethora of social tools to enhance sharing and grow its community.