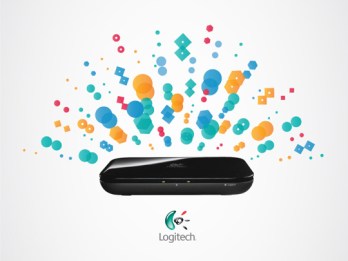 After months of mere glimpses at Logitech’s Revue set-top box, I got a closer look today, as well as some hands-on time, with the Google TV-powered device.

The box will come bundled with a controller that looks like a typical computer keyboard with media controls. Logitech showed the product off at media events in New York and San Francisco today. It certainly felt thin and light in my hands, but its size may turn off many consumers. Luckily, Logitech also developed a smaller keyboard it’s calling the mini controller which is far more compact.

Logitech will be releasing Revue apps for both iPhone and Android phones that will let users control the set-top box. Users will be able to perform voice searches for content, and also push certain media like YouTube videos to the Revue box. Both of these features were demonstrated when Google first announced Google TV.

Logitech reps also showed off the TV Cam — a $149.99 high-definition webcam that takes advantage of Logitech’s Vid HD video conferencing software. The software is built into the Revue box and can communicate with Vid HD software on Macs and PCs. Consumers will be able to digitally zoom during a video call and pan the camera left or right digitally. When asked if Logitech’s recent line of HD webcams for computers would work on the Revue, the rep said they won’t “at the moment.” The TV Cam apparently features hardware compression, something that Logitech’s computer webcams don’t offer yet.

Surprisingly, Logitech brought out a Dish Network representative to promote the Revue’s Dish integration. Previously, it was assumed that Dish will integrate Google TV directly into its satellite receivers. That may still happen, but for now the Revue is Dish’s ticket to Google TV. The Revue will be able to communicate with Dish’s programming guide and DVR. The Dish rep also mentioned that Sony’s Google TV sets won’t be able to take advantage of Dish DVRs yet. [Update: Google says Sony Google TVs will integrate into Dish’s DVR just fine.]

The Revue box will be available for pre-order today for $299.99 (Dish subscribers can snag it for $179) at Amazon, Best Buy, and Logitech’s websites. Logitech expects the device to be on store shelves, and ready for shipment, by the end of the month. The mini-controller will retail for $129.99, and Logitech will also make the bundled keyboard available separately for $99.99.