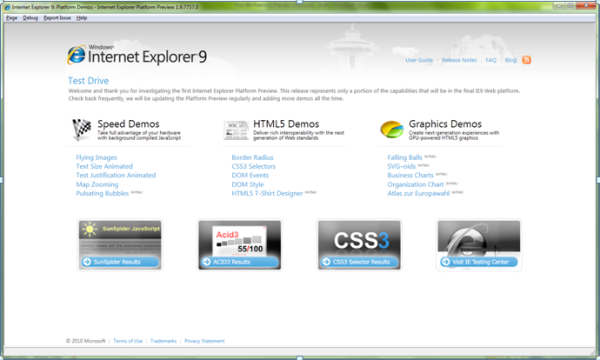 Microsoft today has released the first developer preview of Internet Explorer 9 at ietestdrive.com.

It’s a very early look at the web browser, and consequently it has little in the way of a user interface. There’s no toolbar of any kind and no built-in security. The preview is instead meant to show off the IE9 platform, which includes Microsoft’s new JavaScript rendering engine (codenamed “Chakra”), and early support for emerging web standards like HTML 5, CSS3, and SVG2.

These standards will make for more robust websites in the future by integrating features like offline support and multimedia elements without the need for plugins like Adobe Flash. These new standards are already implemented in varying degrees in Firefox, Safari, and Google Chrome, so Microsoft needs to catch up quickly.

Microsoft’s new JavaScript will also better take advantage of multiple CPU cores. With a dual core CPU, IE9 will be able to dedicate the second core to translating JavaScript to native machine code to help speed up the browser, according to ZDNet.

Microsoft also reiterated that IE9 will not run on Windows XP at all. The minimum operating system for IE9, including this developer preview, is Vista with Service Pack 2 installed.

This is just the first of many IE9 preview builds that will precede the first beta release. Microsoft doesn’t have any dates in mind for the final IE9 release, but I’m thinking it would likely drop sometime in late 2011.