At last Sunday night’s Academy Awards ceremony, a startup studio that makes animations, apps, and ebooks won the Best Animated Short Oscar for its film “The Fantastic Flying Books of Mr. Morris Lessmore.”  The 14-minute movie was the first from Shreveport, La.-based Moonbot Studios, a multimedia company that is making a splash far from Hollywood, Silicon Valley, and Pixar.

What began with three partners — well-known illustrator and author William Joyce, and industry vets Lampton Enochs and Brandon Oldenburg — has grown into a bustling company with 35 employees. The studio started with minimal funding, and that DIY spirit has infused both its aesthetic and its business practices.

“Everything we’re doing is bootstrapped and frugal, and seat-of-our pants in a MacGyver kind of way,” said Oldenburg, in an interview with VentureBeat the day after being nominated for best animated short. 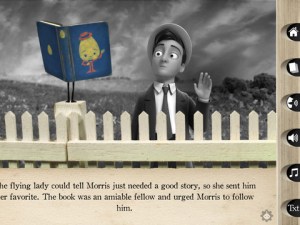 Above: From the $5 interactive ebook iPad app.

Part of what makes Moonbot unique is its tech savvy and the variety of mediums it embraces. Now, in addition to animated movies, the studio is creating and selling mobile apps, interactive ebooks, games, and old-fashioned paper books.

By starting with a story instead of a set end-product, the studio has more options for ways to package all the resources it creates. “It’s this gift we didn’t know was sitting there,” Oldenburg said of the “Lessmore” assets. “We just took a little effort and re-purposed things.”

The studio even puts on live puppet shows.

“Live audience interaction is great way to develop stories,” explained Oldenburg. The studio has tested stories and characters by building puppets and staging live shows for local audiences in Shreveport. “It’s this whole new revolution of handmade. Etsy and Kickstarters, they’re all underdogs in a way, but they’re also beautiful and pure in a way too. We want to continue down that path for ourselves.”

Naturally, the underdog studio picked an underdog town. Shreveport may seem like an unlikely place for a studio to set-up shop, but Moonbot’s founders were drawn in by great tax incentives offered by the state of Louisiana and the city of Shreveport in an attempt to bolster the local economy. It’s also Joyce’s hometown, and Louisiana is the setting for “Lessmore.” Louisiana is the third-largest state for film production in the U.S., following California and New York. While most of that business is focused in and around New Orleans, some is trickling into Shreveport and other Louisiana cities, where creative companies such as Moonbot are embraced.

“If you’re looking to create a startup, go someplace where you have a whole town to back you up. Here we’re the only fish in the pond,” said Oldenburg.

Working outside of traditional production areas also has its challenges, like staffing; seventy percent of Moonbot’s staff have been relocated to Shreveport from other locations. However, it is working with two local universities on job training programs, and more talent could start moving to the area as the industry grows. Other startups are already popping up in the area, like mobile-app development studio Twin-Engine Labs, which worked with Moonbot on on the interactive “Morris Lessmore” ebook.

Moonbot may have won a huge award for a movie, but its business model isn’t that of a traditional film studio, perhaps because it recognizes movies aren’t where the money is being made. The company (which calls itself “An interplanetary creative expedition of story and art”) is half focused on fostering and developing its own intellectual properties, and half on collaborating with clients on the stories they want to tell.

“We are a story-telling company and we like to innovate in new ways of telling stories,” said Oldenburg. “Short films don’t make any money really, they just become calling cards for who you are and what you’re about.”

An Academy Award for your studio’s first film is quite the calling card.