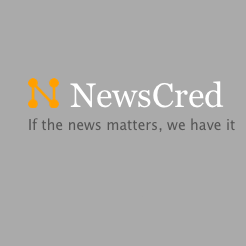 Digital newswire service NewsCred has raised a new $4 million round of funding, the startup announced today.

NewsCred is basically a reinvention of the current newswire model made famous by the Associated Press. However, NewsCred doesn’t produce its own news, but it does intend to disrupt the traditional newswire business.

“We’re not trying to bash the AP, but with technology creating new digital distribution barriers you have to evolve. And that’s where we think there’s an opportunity”, NewsCred founder and CEO Shafqat Islam told VentureBeat. Unlike the newswires of old, which basically hook you into a fire hose of content for others to sift through, NewsCred wants to make the service much more user-friendly, while making money for the entire news industry.

The service collects news content (articles, photos, videos) from over 700 high quality publications, which range from international newspapers to talented news bloggers. Some of those include The Economist, Forbes, Telegraph, The Guardian, McClatchy/ Tribune Newspapers, Bloomberg, Reuters, the LA Times and more. All content is properly attributed to the original source and each source gets paid when content is used.

Customers who wish to have a steady stream of news available to them can sign up for a monthly fee, just like you would with an AP wire subscription. And as for the type of news, NewsCred has plenty of options. In addition to an in-house editorial team curating content, NewsCred uses an API to filter articles by topic, location, language, sources and date. The company organizes content into 20 categories and over 47,000 topics. Customers are charged based on the volume of news stories as well as the sources licensed.

Islam said NewsCred is already providing some of its sources with six-figures annually. And mind you, this is essentially passive income for those news publication partners. They are already producing news and making profits entirely separate from the NewsCred wire, so for a smaller, yet dedicated news organization this could be a huge source of revenue.

Founded in 2008, the New York-based startup previously raised a $750,000 seed round from Floodgate, IA Ventures and Naval Ravikant. The new $4 million round was led by FirstMark, with participation from Lerer Ventures, AOL Ventures, Advancit Capital (Shari Redstone) and other prior investors.