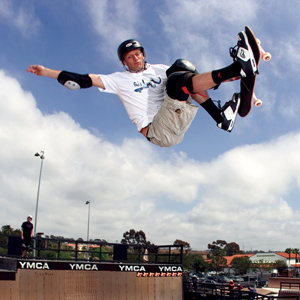 Google has placed more than $100 million aside for original YouTube programming, including a major deal with retired skateboarding legend Tony Hawk, according to the Wall Street Journal.

Google wants to advance the reach of YouTube by adding original programming to its already popular mix of user-generated and professionally made videos. Google is reportedly one of the highest bidders for streaming service Hulu, indicating Google’s interest in offering programming. But if that doesn’t work out, Google could use YouTube as a place for that sort of original content and sell advertising against it.

Thus far, the biggest names Google has brought to the table include Tony Hawk and media companies like Warner Bros. and News Corp.-owned ShineReveille, which helped produce Ugly Betty and The Office.

Smaller-but-still-notable companies in talks with YouTube for original content include the production company behind hits like The Price is Right and The X Factor and the company that produced VH1’s Mob Wives.

Google will create new online programming “channels” full of professional content. The company hopes that it will be able to sell enough advertising against the programming to make back the $100 million in cash advances.

It’s possible the new YouTube programming could fit into Google’s future plans for Google+. Google could offer up these channels with Google+ users in mind as a chance for people to simultaneously watch and comment on first-run airings of shows. Offering that sort of future-looking feature set could potentially help Google steer users away from streaming leaders like Netflix and Hulu.