For the past decade, we have been adapting our attention spans to changes in news media. But the future might hold the converse— the news media adapts to us. How will this impact the future of news?

A recent Microsoft consumer study claims that the human attention span today is 8 seconds, down from 12 seconds in 2000. The goldfish has an attention span of 9 seconds. Make do of what you want with this research, but I don’t believe that this warrants lamentations about phones ruining our minds. Instead, over the past decade or so with the advent of social media, our minds seem to have evolved to adapt to the information flood from the synergy between news media and social media.

In 2015, social media drove more referrals to news sites than search engines. Today, digital advertising revenue accounts for 36 percent of the New York Times’ advertising revenue and 70 percent of Forbes’. Social media is the pedal behind the wheels. In addition, new notable printless news media companies were born out of this social media proliferation era such as the Huffington Post (2005), BuzzFeed (2006, same as Twitter), Business Insider (2009) Mic (2011), and Quartz (2012).

In short, as news media became increasingly reliant on social media as a vehicle and as social media also increasingly found its way into all of our lives, we, humans seem to have adapted our attention span to this new information flood. We had to figure out how to deal with the constant bombardment of information, so we shortened our attention span from 12 to 8 seconds to help us multitask, prioritize, and consume quickly and efficiently. But what happens next in this quasi-evolutionary relationship between our attention span and the news media? Could we reach 7, 6, or 5 seconds very soon? I find that unlikely. Instead, I think that we’re at a turning point in this relationship — news media is starting to adapt to us.

The news media is beginning to feel the effects of attention economics, the idea that a wealth of information creates a scarcity of attention and thus a need to efficiently allocate attention. Although it applies to the social media age of the past ten years or so, it’s hardly a new concept. In 1969, Nobel Laureate Herbert A. Simon wrote:

In his paper, Simon referred to a flood of information from those colossal computers of bygone era, but nonetheless, his theory can also be applied to the recent flood of information from social media and news media. And now that we are reaching this new era of attention scarcity for the news media, what does it mean for publications and journalism?

Our shorter attention span isn’t the only factor causing a shift in the number of words in a news article. Mobile drives more traffic than web for the vast majority of news companies today, which means that optimizing for small phone screens should be a priority for them. Both of these factors are driving a decrease in the average length of a news article.

For example in 2014, the Associated Press, world’s largest independent news organization, called for its journalists to keep articles in the 300–500 words range. Email, a seemingly antiquated and unsexy concept, is now the vehicle for newsletters, a short, summary-based format with which several major news companies are experimenting (think theSkimm as well).

In addition to a decrease in the average number of words, we will also see increased investments and experiments with new interactive formats (that are still fewer words), such as the New York Times virtual reality app for Google Cardboard, the Quartz chatbot app, CNN/Wall Street Journal/BuzzFeed chatbots inside Facebook Messenger, Periscope channels, Snapchat Discover, and startups like Hardbound.

This sounds contradictory at first considering the previous paragraphs. But even though our attention span is shorter, we still read engaging, analytical long-form pieces (1000 or more words). NewsWhip looked at the top 10 stories on Facebook for five major news publications in 2013 and found that these stories were either ultra short (under 300 words) or long-form. The New York Times’ top 10 stories had the highest average word count at above 2,000 words.

Quartz’s editor-in-chief Kevin Delaney appears to agree with this theory. In 2013, he explained that Quartz either published articles under 500 words or around 1,200 words, saying “Too much reporting is 700-word articles that everyone else has got.” Here’s a visualization: 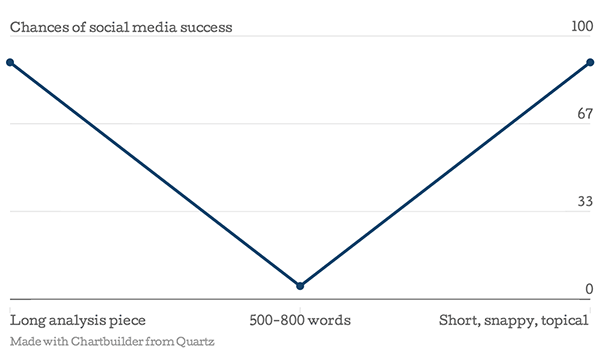 So it seems that we still have a penchant for long-form despite our dwindling attention span. We are willing to actively sustain our attention span, but only if the quality is truly interesting and engaging. We more carefully pick what’s worthwhile to spend many minutes reading, which means that news publications should begin to devote more resources to producing quality long-form articles. For instance, one of the New York Times’ top 10 stories in November 2013 was an article on Australian immigrants that was over 10,000 words, the length akin to a literary short story.

Besides actually reading articles, we also spend a lot of time reading just the headlines. Roughly 60 percent of Americans admit to only scanning headlines. It shouldn’t be surprising because it fits into the theme: we spend a few seconds on each headline and move on because we have a flood of information to digest. So what’s a journalist to do if she wants actual readership? Create attention-seeking headlines.

But what also naturally accompanies attention-seeking headlines is more sensationalist text. If a reporter hints at a controversial slant in the headline, logically, the writer is more likely to actually include that slant in the article, too. I’m not saying that reputable news sources will begin resorting to the clickbait strategies — with which we’re all unfortunately familiar. Rather, we’ll likely see a decrease in neutrality in journalism. An Edelman study showed that because of the reliance on social media, 75% of journalists feel the pressure to create content that has a virality factor, and virality often runs the risk of sensationalist slants. It’s a slippery slope, and we don’t need to look further than the fake news of 2016 US Election for a possibility of its ramifications.

For better or for worse, these are three effects from our shortened attention span that I think that we’ll start seeing across the news media. The tables have flipped, and the power of the reader seems greater than ever.