Do you use YouTube with Adblock Plus? Some users have been getting the following message instead of ads: “An error occurred. Please try again later.”

The error message is only shown for the duration of the ad, meaning Adblock Plus is still technically getting the job done. But ad blocking extensions typically remove ads as well as blocking them. For banner ads that means gaining back screen real estate on the webpage, while for videos that means the content starts playing right away. Adblock Plus has removed YouTube ads successfully for years, but sometime in the past week something broke down.

In our tests, the problem only occurred on Chrome with Adblock Plus, wheareas Firefox with the extension installed worked just fine. Other users have reported that the problem occurs in every browser. The issue also appears to only affect certain Google accounts, so some users have simply changed accounts to avoid the error. 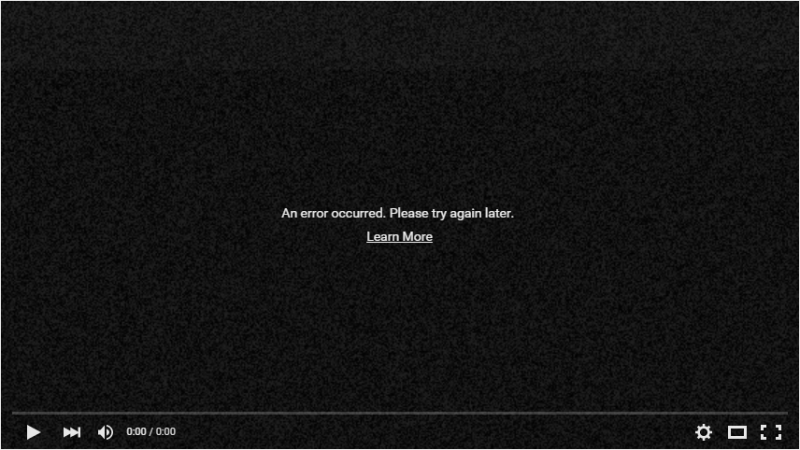 “We’re looking into what the problem might be, but at the moment it would appear to be an issue on YouTube’s side,” Adblock Plus head of operations Ben Williams told VentureBeat. “Let’s hope for a speedy solution.”

In the meantime, Users on the Adblock Plus forums and Reddit have found a temporary workaround. To avoid the error, you’ll have to uncheck everything in your Google Ads settings (both for logged in and logged out) as well as installing the IBA Opt-Out extension.

This is the latest episode in the long battle between advertisers and users who want to avoid ads, and it is a stark reminder of the extent to which users will go for a completely ad-free and clean experience on the Web. It’s not currently clear if this issue is the result of YouTube experimenting with a solution that blocks ad blockers or is just a bug.

We contacted YouTube yesterday regarding the problem, but, likely because it’s the weekend, we have not heard back anything concrete. We will update you if and when we do.

Update on March 14 at 3:03 p.m. Pacific: YouTube is investigating. “We’re looking into this issue but at the moment we don’t know what is causing it,” a YouTube spokesperson told VentureBeat. Also, a source close to the matter confirmed to us that this is a bug and not a deliberate change.