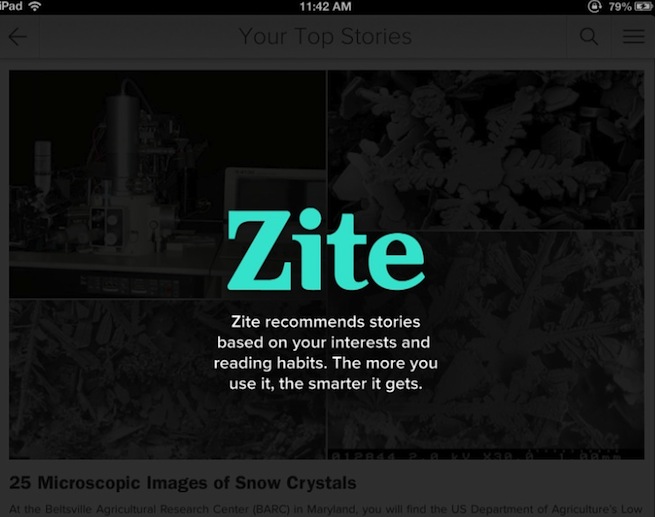 Disclosure: VentureBeat is one of Zite’s publishing partners, which permits us to place house ads within the VB publisher section of Zite free of charge.

Zite was one of the first companies to answer cries from loyal Google Reader users when the service was shuttered back in March, building a “replacement” in six hours. Yet in the news reader’s latest iOS app update, Zite’s management team makes one thing very clear: It’s time to let Google Reader die.

At its core, the CNN-owned Zite is sort of the anti-Google Reader, anyway. Google Reader pulls in RSS feeds from any news website as they become available, which creates an unruly fire hose of content that most people couldn’t possibly keep up with, and the design is bland and basic. Zite, on the other hand, curates news from the best publications on the web using your preferences and arranges them in a visually pleasing digital magazine layout.

“We realized we didn’t need to shift focus of the company for the next two months trying to build a Google Reader replacement, because we already did that in 2011 with Zite,” Zite CEO and founder Mark Johnson said in an interview with VentureBeat. “I think part of the reason Google Reader’s death was so prominently covered was because a large group of Google Reader users were people in the media. A very small portion of people — reporters, analysts, VCs and news junkies — are actually benefiting from seeing every single one of those articles in one place.”

I tend to agree with Johnson’s assessment, as I had a front row seat when my boss, Dylan Tweney, and colleague Sean Ludwig communicated their frustrations over Google Reader going away. I imagined them pulling their hair out trying to find a replacement. [Not counting Canadians, all the men on VentureBeat’s editorial staff have — or have the ability to grow — full heads of hair, but Google Reader’s death almost changed that — Ed.]  But those that just want a good mix of articles from trusted sources that can reasonably be finished without having to block out half a day on the calendar, Zite already did a pretty good job of delivering. The latest update, however, makes some important tweaks to the user experience that will help ease those former Google Reader fans into Zite’s news curation service. 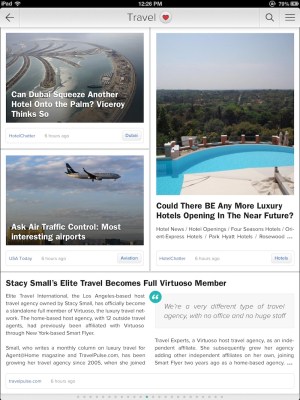 With Zite, you can “thumb” up or down articles, but now you’ll be able to see a prominent list of sources that you’ve “thumbed up” in the topic drawer (aka category or section) — sort of like a list of favorites. You’ll also be able to click through to any of those sources to read and vote on everything they’ve published recently. All the content you’ve read will now appear gray to signify what you’ve seen previously — a nod to Google Reader’s bold/gray headlines. And finally, Johnson said, Zite wants to fix the problem Google Reader had with burying really good content from sources that published something only once or twice a week (or month) by giving it a higher placement within Zite’s magazine layout. That means the algorithm for news curation is changing slightly to unearth what would be the best content from a Google Reader account with hundreds of headlines collected from lots of handpicked sources/publications.

“The goal is to give Zite more of a magazine feel that’s inviting, not a huge list of headlines and photos,” Johnson told me. Zite is also rolling out more diverse “story cards” that help break up what’s shown on the screen. For instance, some topic drawers will have only headlines and photos from sources, while others may feature a headline and a good pull quote from an article, which I’m guessing is similar to how Flipboard presents content. In other words, unlike Google Reader, there isn’t a flawed display that’s exactly the same for every story, since a one-size fits all approach really doesn’t work when dealing with content from more than a handful of publications.

Johnson said Zite’s strategy focuses on streamlining the news curation and consumption experience for new Zite users. He nicknamed this process “frog cooking,” a term I was previously unfamiliar with.

“It’s said that if you slowly raise the temperature of the water inside a pot with a frog inside, you’ll be able to cook [the frog] without it noticing,” he said.

I didn’t ask, but I’m quite positive no frogs were harmed during the development of Zite iOS version 2.3. And while Johnson was likening the “frog cooking” to new users unfamiliar with Zite (and walking them through the process with tutorials as shown in the screenshots below), I’d characterize most of the new tweaks in the iOS update to “Google Reader-er cooking.”

In addition to various UI and algorithm tweaks, Zite is also bringing on a slew of new publishing partners, including Atlantic Media (The Atlantic and Quartz), Business Insider, Fast Company, GigaOM, Salon, SAY Media (Remodelista and ReadWrite), and Serious Eats. Zite users can add any of these publications a separate section within the Zite app, as VentureBeat previously reported. And while the latest updates are only available on iOS devices, Johnson said the team is planning to launch a new version of its Android application later this year.

Zite’s iOS app update should be available for free later today via the iTunes App Store. Check out the gallery of screenshots below for a closer look at the latest version of the app.