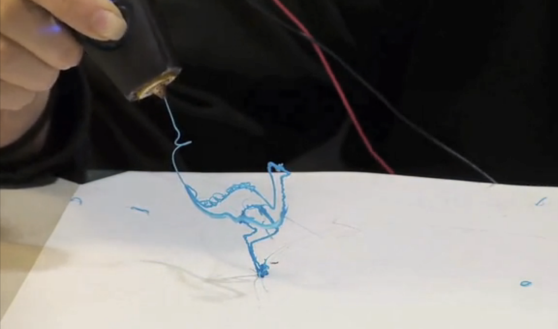 Launching today via Kickstarter is the 3Doodler, a 3D-printing pen that can create solid objects from melted strings of plastic. As with 3D printing as a whole, the 3Doodler works in a way that’s almost magical: You’re actually creating objects out of thin air.

More notable is that the device will retail for roughly $75, which is absurdly cheap in comparison the prices of more full-featured devices like the $2,000 MakerBot Replicator. Obviously, the 3Doodler won’t be able to create the same quality printouts as the Replicator, but for a lot of people, that won’t matter.

Safety, however, is a concern with the 3Doodler. While a pair of toy designers created the device, this isn’t the kind of toy you’d want to give to your kids: The pen’s metal tip can reach temperatures as high as 270 degrees Celsius, which is a burn hazard for just about everyone. This is one case where it’s best to leave the kids to their crayons and paper.