Yesterday, Advanced Micro Devices, one of the biggest chip-design companies in the world, appointed Lisa Su as its president and chief executive officer. She is the latest female top executive at a major Silicon Valley tech company, and she is the first female boss at the 45-year-old company that had $5.3 billion in revenue last year.

Su, 44, succeeds Rory Read, 52, who stepped down in a surprise announcement. She has been at AMD for just a few years, but in that time, the company has executed on its strategy to grow its business in new markets. In 2012, 91 percent of its business was in the traditional PC microprocessor and graphics chips. Now about 40 percent of revenues come from markets such as game consoles, dense servers, and embedded devices.

AMD is still No. 2 in PC processors to Intel, but Su told us in an interview that AMD won’t define itself in somebody else’s shadow. Here’s an edited transcript of our interview. 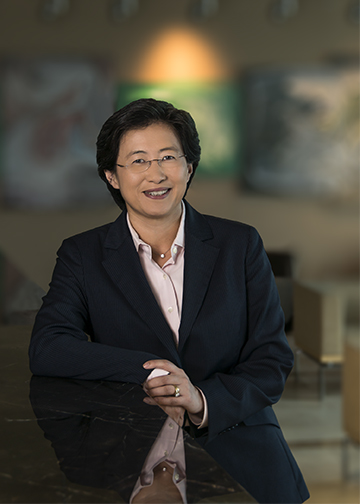 VentureBeat: What are your plans as CEO?

Lisa Su: My focus has always been on running the business and making sure that we’re building the right products. As CEO, I’m looking at opportunities to streamline and improve our business operations.

VB: AMD has always had tough competition from Intel. How do you look at that, given that you have a chance to start a new era here?

Su: My view of AMD is that we have a tremendous set of technology assets, people, capability, customer relationships. We’re not going to define ourselves in somebody else’s shadow. We have great technology assets that we can apply across a number of different markets. In the PC business, we obviously compete against Intel, but in other businesses, as we go into embedded and semi-custom, it’s a different playing field.

VB: What are some things that you could say to address anybody who might have a concern about a transition period ahead? People may be worried that AMD’s financial performance could take a hit during a transition.

Su: I’ve been with this company for almost three years. I know it very well. We’ve always said that this is a multistage transformation. The first two steps were focused on resetting and restructuring the company. As we go into this third phase, it’s about technology and technology bets. We’re in this for the long term — certainly I’m in this for the long term — to build out great products and create a great franchise for the company. Those are the key beats.

VB: How do you feel about being the first woman to become CEO of AMD, and one of the few women holding that office in a big Silicon Valley company?

Su: I’m obviously honored and excited to accept that vision. Being CEO of AMD is a tremendous opportunity to influence the industry and influence the future of computing. I’m very excited and enthusiastic about all that’s in front of us.

VB: Diversity in Silicon Valley seems like it’s more on the radar in recent months, doesn’t it?

Su: One of the key things is, when you look at semiconductor companies, it’s all about experience. I’ve spent my entire career in semiconductors. From an opportunity standpoint, there’s a lot of opportunity to move this company forward.

VB: You’re still a rare example in the industry. Hopefully that won’t be the case as much going forward.

Su: Certainly there’s an opportunity to improve, no doubt.