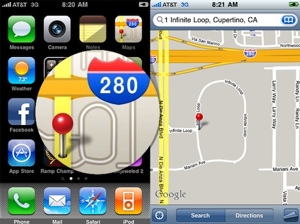 Apple has apparently acquired a company called C3 Technologies that has sophisticated processing technology that can build 3D maps.

Here’s why: If there’s one thing Apple hates, it’s having to rely on technology from a competitor. And when you navigate or get directions on Apple iOS devices, such as the iPhone, you’re using an application from Google Maps — because Apple has nothing else.

That’s a big sore spot for Apple. And because it concerns Google, it’s a very big one.

Well, there’s evidence that Apple is secretly building out its own mapping technology, even if it’s not clear right now just how ambitious the effort is.

This acquisition of C3 is just the latest move. The deal looks worth about $240 million. (The terms are a bit confusing: There are reports that it was worth $1 billion, but there were more credible reports that it was less, based on the fact that the company’s biggest shareholder, SAAB AB, had a 57.8 percent stake in the company that was worth $150M). The acquisition was made last year, but it has only now come to light that Apple is the owner.

Here’s what’s interesting: C3’s technology can be used to seamlessly integrate 3D imaging into traditional 2D maps and other photographies. 9to5 Mac has the scoop, with more details.

You can see a video demonstrating the technology at bottom.

The acquisition comes after a string of moves that suggest Apple is building both a back-end mapping system to be able to compete with Google’s GPS offerings as well as a string of other high-tech layers — such as this 3D map offering — that will give it something special. Apple’s move to offer high-powered custom chips (A5, for example) keeps it on the bleeding edge and gives it a leg-up against other manufacturers when it comes to processing-heavy apps like maps. So Apple may be hoping to more than catch up with Google’s superior mapping offerings — it probably wants to surpass them.

Another reason Apple must make a move: Even though it licenses Google’s mapping technology for its users, the technology just doesn’t work as seamlessly only Apple’s devices as it does on Google’s Android phones.

Google’s Android supports maps with deeper integration with the phone and offers more bells and whistles. For example, while navigating on Google phones, Google will automatically update your next turn from your current location — in other words, operating like a standalone GPS device. Google’s Android offering also has offline caching of frequently used areas of the map, so you can find your way home if you lose connectivity. You can also more easily view location history, and there’s nice integration with cool features like Latitude and Places — including letting you rate places easily.

Expect to see more from Apple on mapping soon. C3 Technologies CEO Mattias Astrom, CFO Kjell Cederstrand, and lead C3 Technologies Product Manager Ludvig Emgard, as well as most of the former C3 team, all now work within Apple’s iOS division, 9to5 reports. The team is based in Sweden and called “Sputnik.”

“Yep, Sputnik, a clear reference to the “Sputnik crisis” of 1957 when President Eisenhower created NASA in order to catch up to the perceived advantage by the Soviet Union in space. For Apple, this clearly a big deal.”