Apple today debuted its 10th anniversary iPhone X, its most expensive ever, with a striking new OLED screen that covers almost the entire front of the gadget.

During the company’s annual announcement event, held for the first time in the Steve Jobs Theater at its new Apple Park headquarters in Cupertino, California, the company confirmed many of the specifications that had been widely rumored and leaked in the weeks leading up to the event.

“Our team has been hard at work on something important to all of us,” said Apple CEO Tim Cook. “Ten years later, it is only fitting that we are here in this place on this day to reveal a product that will set the path for technology for the next decade.”

The company said pricing for the iPhone X starts at $999 for its 64GB version, but did not specify a price for the 256GB version. That’s considerably more costly than the $649 the iPhone 7’s price.

But more troubling, it seemed to confirm reports about difficulties in manufacturing the device, the result of the switch to the more advanced OLED screen.

Apple said the iPhone X would start preorders on October 27, and start shipping on November 3. That’s later than the typical September launch date of a new iPhone. In contrast, the iPhone 8 and iPhone 8 Plus, which offered only modest updates, are available to preorder on September 15, with shipping on September 22. Though executives did not say so, analysts have also speculated that the iPhone X will be in limited supplies into 2018.

The tradeoff for Apple comes with the move to a more advanced screen and display. The iPhone X will have an edge-to-edge, 5.8-inch OLED display screen that will require long-time iPhone users to change some of their habits. As with some rival Samsung phones, the screen now covers the entire front of the phone, with no framed edges around it. As a result, while the phone itself is closer in size to the basic iPhone 7, its screen will surpass the 5.5-inch display size of the iPhone 7.

“The first OLED display great enough to be in an iPhone,” said Apple senior vice president Phil Schiller. “The level of quality and responsiveness and efficiency is a breakthrough in mobile displays.”

But as had been reported, Apple dropped its physical “Home” button, and so there is no Touch ID on the iPhone X. To unlock the iPhone X, a user can tap on the screen to wake it up, and swipe from the bottom of the screen.

For greater security, there is a new facial recognition feature for unlocking the phone called Face ID.  It’s facial recognition that works by using the front-facing camera to take a 3D scan of its owner’s face. This Face ID is then used for verifying the owner’s identity for unlocking the phone, as well as authenticating payments and any other features that previous required the Touch ID security.

“This is the future of how we unlock our smartphones and protect our personal information,” Schiller said.

Schiller said the new phone chip has a new A11 Bionic neural engine, to process the face recognition behind Face ID.

Naturally, the camera is also getting a big upgrade. Because of the edge-to-edge screen, the front-facing camera now sits in a cutout in the top part of the screen, along with some sensors and the speaker.

It now features a TrueDepth camera system that includes an IR camera, floor illuminator, and dot projector, in part to boost the Face ID system as well as the new Animojis that Apple announced.

Animojis exist in Apple’s Messenger and will be available in iOS. These are animated versions of your favorite emojis that use Face ID on iPhone X to create customized 3D versions that track and mirror a user’s facial expression. 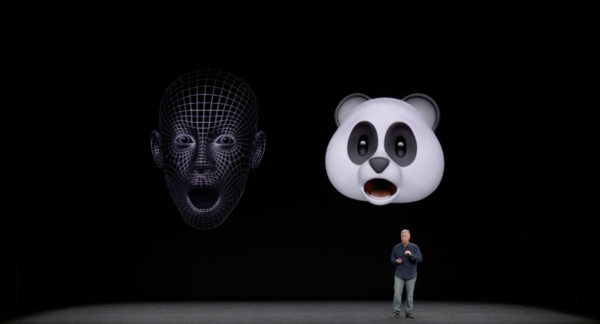 Of course, photography has become a critical part of the motivation for upgrading, and Apple has thrown in a few new tricks to continue improving the quality. One of these is Portrait Lighting, which improves the depth on photos.

With the iPhone 7 Plus, Apple introduced a dual-camera system that allowed for photos that came closer to matching DSLR depth quality. Now it will have dual optical image stabilization, Schiller said. And the new Portrait Lighting effect will provide added depth and work with the cameras’ other lighting features.

Schiller said the iPhone X can also be wirelessly charged, and the battery life will be two hours longer than the iPhone 7.