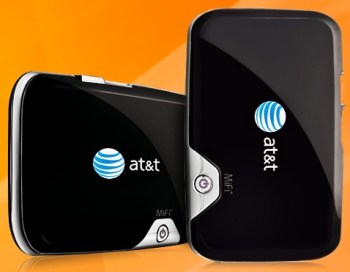 AT&T finally has a MiFi, a device which lets you share mobile internet to multiple wireless devices, of its own. The company announced today that it will offer the Novatel MiFi 2372 starting November 21 for $49.99 after a $100 mail-in rebate.

Thus far, consumers who wanted a MiFi device had to get one from Sprint or Verizon. AT&T’s MiFi comes with some features its competitors don’t have — like the ability to plug in a MicroSD memory card and share files with users connected to the device. It also sports GPS support, and Web-based widgets that can use the device’s location to give you local news and weather.

The MiFi can support up to five wireless devices, and it can deliver speeds up to 7.2Mbps — the maximum speed of AT&T’s HSDPA network. You can subscribe to AT&T’s DataConnect plans at $35 for 200MB of data per month, or $60 for 5GB of data.

I can’t help but wonder what kept AT&T from offering a MiFI device for so long. This is pure speculation, but it’s likely that the carrier couldn’t offer such a data-heavy device until it finally got a handle on its iPhone data load problems. AT&T has vowed to “move heaven and earth” to fix its network, and this year it has invested around $19 billion to improve the network — so perhaps now, it can finally afford to spare some data bandwidth for MiFi devices.

It also may be too late for this device to see much success. Novatel noted in its most recent quarterly earnings that MiFi sales are still strong, but we’re also seeing more phones offering the ability to share wireless internet — which may lead to slower MiFi sales down the line. Nothing has stopped AT&T customers from purchasing a MiFi from Verizon or Sprint either — so I don’t think there’s anybody who has been eagerly awaiting a MiFi on AT&T.