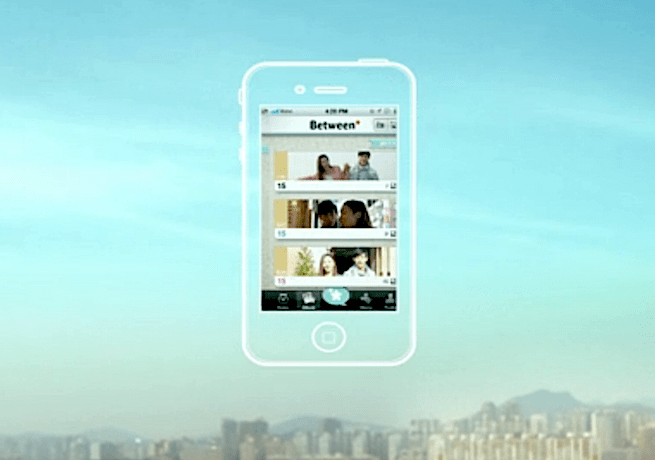 Between, the Korean application for couples, hit 1 million downloads today, only four months since the startup launched in March.

“We’re trying to make Between like a symbol of commitment,” said Edward Lee, a “Value Innovator” at Between’s parent company, VCNC, in an interview with VentureBeat. “That’s one of the ways that it has gone viral. Ladies started bragging about their guys committing [through Between].”

When we met at the beLAUNCH conference in Seoul, South Korea, this past June, Lee explained that he and chief executive Jaeuk Park would like Between to become a relationship status symbol similar to “a ring in the States.” They want Between to become a step in a person’s relationship, not just an app they use to supplement it. Since launching in March after a beta run starting in November, the company has seemingly done a great job getting people, particularly in Asia, to buy into that notion. The team hit 1 million downloads before their five-month marker, 76 percent of which are Korean users.

According to the company, couples spend a significant amount of time on the app. So much time, Lee says, that it is trending like Facebook usage, which currently sits around 400 minutes per user a month. Between sees an average of 300 minutes per user a month, compared to Tumblr, which see around 100 minutes, and Pinterest at around 80 minutes. This means the app is addicting, despite only being able to interact with one other person. 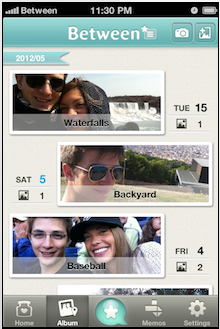 Since launch, however, a couple competitors popped up in the industry, most notably Y Combinator startup Pair. Pair launched in March as well, right around the same time as Between. The company has gotten attention in the U.S. with quirky features such as the “thumb kiss.” That is, one Pair user can press a thumb up against the phone’s touchscreen and if their mate touches their own thumb at the same time, the phone will vibrate and the thumb kiss is completed. Something to be appreciated by those truly in the thick of love.

“I could see that they were branding themselves as the only messaging app for couples. That was the direction they were heading,” said Lee of Pair. “But we think in a relationship two things are really important: communications and sharing and keeping memories. That’s one of the differentiations.”

According to Lee, Pair is focused mainly on helping couples talk, whereas Between wants to help people save memories and moments. It does this through photo albums that are chronologically ordered to follow the flow of your relationship (similar to a time line) as well as the upcoming capability to export your data.

Some challenge how large a company like this can grow. Because it only allows for two people to socialize, there’s little opportunity to invite friends or share content widely. And naturally, some relationships do end, meaning accounts are lost and, in Between’s case, data eventually deleted. Indeed, the company gives split-up couples one month to get back together before their data is erased from the system.

But the company plans on expanding its functions. It will soon offer a public space for couples to talk about coupley things: where are good date-night places, couple-centric events, and other related topics. The company is also doing big marketing pushes in Asia, starting with Japan.

“We know it’s going to work in Asia,” said Lee. “We know it is solidly working in South Korea, so we’re expanding to cultures that are similar, which expands to a big bubble in Asia.”

Between plans to push into the U.S. late this year, and starting in July, the company will start looking for funding. In November 2011, Between received a $1 million seed round of funding from Softbank.