Augmented reality startup Blippar is broadening its horizons today with the launch of a new virtual reality app aimed at kids.

Founded out of London in 2011, Blippar made a name for itself with some notable tie-ups with big-brand market campaigns, including movie trailers, Kit Kat wrappers, and Guinness — you download the Blippar app, hover your smartphone over a physical product, and unlock and interact with additional content.

More than $40 million in funding later, the now New York-based company has launched Blippar Lab, a research and development unit that will be used to explore “innovative use cases for AR and VR across a variety of industries.” The first of these Blippar Lab-branded products is Cardio VR for Google Cardboard, which is aimed at helping children learn about the human body through virtual reality.

If the distinction between augmented reality and virtual reality is lost on you, here’s a summation. AR is when the real, physical world is “augmented” with digital content, such as images or text layered upon a screen. VR is the full recreation of a world in digital, or “virtual,” form.

Cardio VR is available today for Android and iOS (iPhone). To use the app, you’ll need to procure a Google Cardboard device to place your smartphone in, but other brands will work too — I used OnePlus Cardboard to check it out. Without one of the aforementioned VR headsets, the app will look a little something like this. 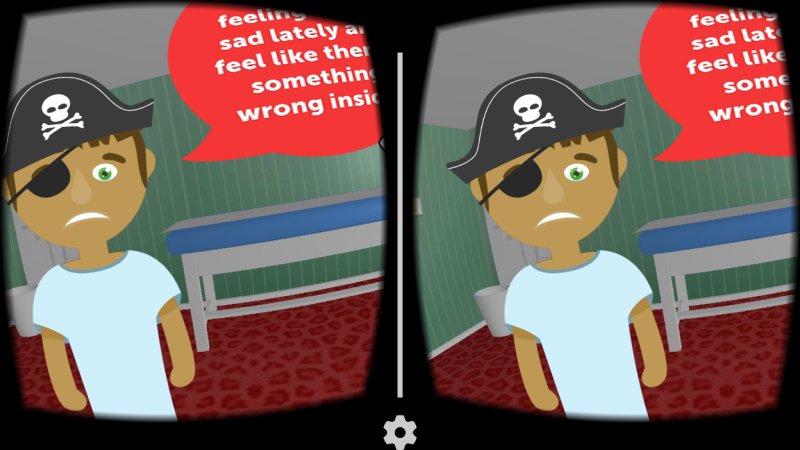 The app is fairly straightforward to use — you enter an animated cartoon doctor’s office and try to identify patients’ illnesses and a remedy. You control the game entirely through head movements; for example, when you hear a knock on the door, you turn your head to look at the door, and this lets the patient enter the room.

I’m not the best subject for such VR experiences, however, largely due to the “puke problem” that has plagued virtual reality almost since the beginning. The problem seems to stem from a slight “lag” between the on-screen graphics and the physical movements. I always end up feeling a little nauseated after about a minute, and Cardio VR is no different, but this issue doesn’t affect everyone.

“Cardio VR marks an important moment in Blippar’s history,” said Ambarish Mitra, CEO and cofounder of Blippar. “Cardio marks our tangible and successful entrance into VR, and we look forward to continuing to produce great experiences for consumers via our newly launched innovation lab.”

To be clear, Cardio VR is deliberately pegged as a “Blippar Lab” product, as it’s still an early-stage initiative, with no immediate goals for monetizing it. The company is looking into the ways AR and VR can connect, and there will be other products emerging “in the near future.”

Blippar has dabbled with similar initiatives in the past — it launched a platform for augmented reality games on Google Glass last May. This came one month before Blippar acquired competing startup Layar to become one of the leading AR companies.

Meanwhile, check out the official demo video of the new Cardio VR app.