American Airlines isn’t the only big U.S. airline creating an Apple Watch app; Delta Airlines and United Airlines are building their own. 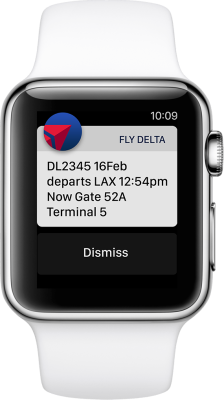 American — an Apple partner at the Watch’s launch — has so far gotten most of the attention for building a Watch app that’ll help you at the airport. But we’re likely to see Watch apps from other airlines too, eventually. A check with a couple of other tech-friendly airlines — Southwest and Virgin America — found no Watch app development activity going on at present — at least not that the companies are willing to talk about.

The United and Delta Watch apps do roughly the same things that the American app does, with a few new wrinkles here and there.

First, the Delta Watch app will give wearers notifications of upcoming flights. This might be days or hours in advance of the flight, says Delta spokesman Paul Skrbec.

The app provides access to the electronic boarding pass displayed on the user’s phone. 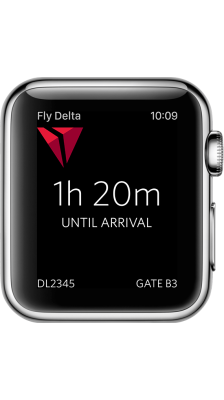 Of course the app provides flight numbers, gate numbers, flight times, and other relevant information. If a flight gets delayed or changes gates, the app will push a notification to the Watch screen, Skrbec says.

As in the existing Delta phone app, Skrbec says, the Delta Watch app provides a “welcome” notification when the passenger’s flight is approaching the destination city. This must happen when the plane comes close enough to be in range of cellular signal. The notification also includes information about the flight’s baggage carousel.

The United Airlines app is similar to the Delta app.
It too provides some quick, glance-able information about the wearer’s flight, including times, gate numbers, and status. Before travel day, the user can view their reservation details on their watch.

The app also pulls the traveler’s boarding pass from the Passbook app in iOS 8. And, like the Delta app, the United app provides alerts when flight times or gate numbers change, according to United spokesperson Jennifer Dohm.

Unfortunately, United was not quite ready to release screenshots of its app.

Both the United and Delta apps are still in development but are expected to be finished by the time the Apple Watch hits the market April 24.